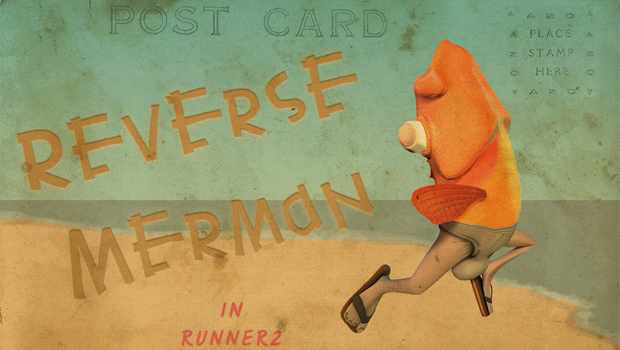 Earlier this week we learned that Gaijin Games’ Bit.Trip Presents: Runner 2 would be among the 50+ titles heading to the Wii U during Nintendo’s incredibly vague and extended “launch window.” And while that’s exciting news and everything, I’d like to take this opportunity to talk about something far more delicious.

To date the Santa Cruz-based indie studio has revealed some of Commander Video’s supporting cast for the for the pseudo-sequel to the fourth game in the Bit.Trip series. This week they’ve revealed the Reverse Merman, who joins Whetfart Cheeseburger and Unkle Dil in the title’s growing cast of edible characters.

With his golden scales and held held high, the fish-like man is certainly an impressive, if incredibly strange, figure. I do have some misgivings about his choice of athletic footwear though. It’s incredibly difficult to run in flip-flops, but his tenacity certainly is admirable.