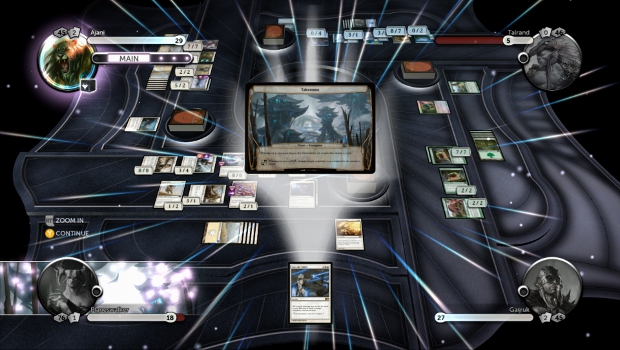 So, I’ve actually just been getting into Magic: The Gathering in the past few days. I picked up Duels of the Planeswalkers 2012 over the weekend in the giant Microsoft sale in the Xbox Live Marketplace for just $5. Destructoid’s Caitlin Cooke has actually been showing me how to play. It was pretty overwhelming at first, but I rather enjoy it quite a bit.

The first trailer for Magic: The Gathering Duel of the Planeswalkers 2013 is out today, and it’s looking spectacular. It shows off the new and improved UI, 10 new decks, the new “Planechase” multiplayer mode, and ends on a tease to “face off a greater challenge” where it shows a painting of a guy standing in front of a giant golden dragon. I can’t wait to fight all the dragons.

Duels of the Planeswalkers 2013 will be out “soon” for XBLA, PSN, Steam, and for the first time iPad. Brush up on those Magic skills, because I know I will be.