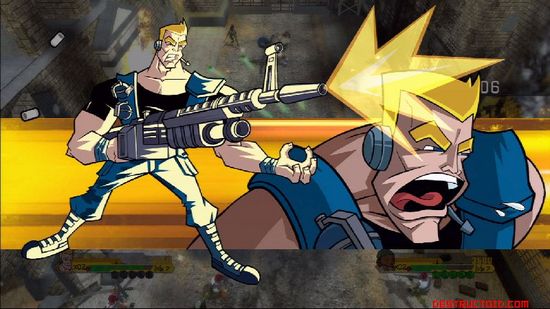 Not to be confused with the PC real-time strategy title, Commandos 3: Destination Berlin, Capcom’s Commando 3 should be making its way to the PlayStation Network and Xbox Live Arcade sometime next year. Yeah, we posted information about this yesterday, but did any of you guys expect the game to look like this? We sure didn’t.

But it’s certainly not a bad thing — the game’s world has an unexpected comic book/cartoon look, with some nice effects and lighting giving the game a nice polish. In our heads, we’re picturing a game akin to the excellent XBLA title, Assault Heroes, and that’s fine, too. With three-player online co-op confirmed, we definitely have our eyes on this one … we love blowing crap up together.

More tid bits from Capcom after the jump.

Lock and Load! Commando 3 takes the no-holds-barred arcade spirit of its predecessors and crafts an all-new furious cooperative shooting adventure for the next generation!

General Ratiev, evil leader of the Zalestad nation must be stopped. At the player’s disposal is a huge arsenal of weaponry, controllable vehicles, and a rag-tag group of specialized soldiers, each with their own unique characteristics. Thankfully, players aren’t alone in this mission; up to three players can enjoy the classic arcade-style experience together on a single console or online. Commando 3 even compensates for the multiplayer mode by dynamically shifting difficulty levels based on the number of players in the game, ensuring that the game always poses a challenge. The Commando 3 soundtrack is being created by Norihiko Hibino, an international composer well-known for his work creating music for the Metal Gear series of games. With a comprehensive scoring system and online leaderboards, players can see how they compare to the best digital soldiers in the world!