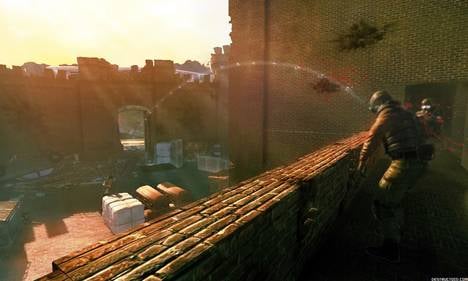 Developed by GRIN (Bionic Commando, Ghost Recon: Advanced Warfighter), the game picks up where the film left off, continuing the story of hero Wesley Gibson. The third-person action title will focus heavily on action, including “Curving Bullets” and “Assassin Time” mechanics snatched directly from the film. Wanted (the videogame based on the movie based on the comic) will also incorporate some sort of “advanced cover mechanic” which relies heavily on the environment and other items.

We were set to check out a behinds-closed-doors preview of the game at this year’s E3, but when Chad arrived, they accidentally ushered everyone into the room but him. Hand of God. That actually happened. Go ask him.

In any case, we have reasonably high hopes for the game: veteran film to decent game producer Pete Wanat (The Thing, The Chronicles of Riddick: Escape from Butcher Bay) is involved in bringing the title to life. Wanted (the videogame based on the movie based on the comic) is set to hit consoles and PC sometime this year.