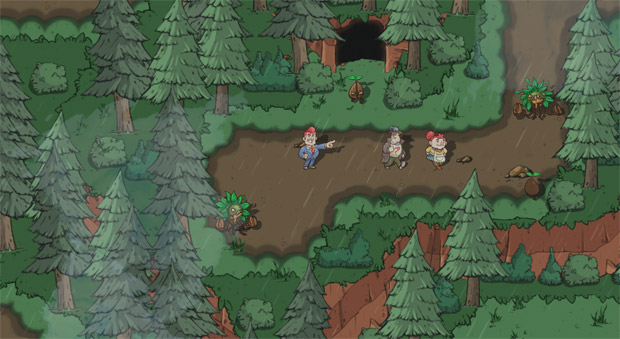 From the developer of Waveform

After releasing its well-received action-puzzler Waveform on PC, independent developer Eden Industries has moved onto its next, much more ambitious project. Citizens of Earth is a role-playing game in which you, the Vice President of the World, come back to visit your hometown only to discover that something’s not quite right. Long story short, further investigation becomes a personal responsibility, as is usually the case.

A total departure from Waveform, this game brings genre tropes into a modern setting where recruiting party members, for instance, means getting the local teacher or barista to come fight for you. I’ll go ahead and point out that EarthBound is one of the influences on this project and kindly leave it at that. We were given an early overview of the game, as well as a few screenshots and some character artwork.

In talking about the project, Eden founder Ryan Vandendyck had much to say about the townspeople that players will recruit. Essentially, each would-be party member will have an honest-to-goodness day job that they will return to if they aren’t being used in the VP’s active party, and battle experience will translate to job-related perks. For example, shop owners might have additional (and unique) items for purchase, while others might grant you abilities like being able to zoom out the map to find secrets or skip time in Citizens of Earth for the sake of power leveling.

The hope is to make every character bring something unique to the table, which ties into one of the team’s guiding principles: “broader, not longer.” In other words, Citizens of Earth promises to be rich in content, but most of it will be optional, providing a critical path for those who lack the time or interest to see and do everything.

“I know a lot of people that love RPGs, but can’t bear to play them because of the time investment normally required,” he told me via email. “So we wanted to come up with a way to let someone with not a lot of time on their hands still enjoy the RPG experience that they crave and play through to completion without feeling like it was a chore. But at the same time, we also recognize that some people love pouring a ton of time into an RPG and squeezing every last bit of content and gameplay out of it. So the ‘broader, not longer’ mantra came out of the desire to make something to be enjoyed by both groups of people.”

Eden recognizes that in certain RPGs, “it quickly becomes cumbersome and frustrating to try new characters.” To address this, Vandendyck says that in Citizens of Earth, “as soon as you switch to a character, they are absolutely ready to use right out of the box. While they do acquire new equipment and skills down the road, these do not represent incrementally better options (like in most RPGs, thus forcing you to constantly upgrade) but rather new choices and strategic options.” The intent is to allow in-depth customization for those who want it, and the option to experiment freely without being punished.

The team isn’t talking too much about combat yet, but it will be in line with typical Japanese role-playing games; specifically, Dragon Quest was cited as an inspiration. Players can enter battles with three characters and, in a refreshing twist, are able to restart encounters at any time to swap characters in and out of their active party. I was told that the team “want[s] players to be limited only by their imagination of what they can bring into combat, not by artificial design constraints.”

As you can see from that first screenshot, the enemies most certainly look like enemies. “We’re keeping the story a bit of a mystery at the moment, but what we can say is that someone or something is doing weird experiments on people, animals, and the environment to make bizarre hybrids and re-creations of things,” explained Vandendyck. For reference, a couple of examples given were a Rastafarian Samurai and a Toupee Eagle.

It also delights me to be able to write that there are no random encounters in Citizens of Earth; foes will be represented on the map, a feature I feel should be the norm by now. Lastly, Eden has plans for an online arena, which is something I wouldn’t necessarily have expected but makes sense. Very little about this project is expected, for that matter. It sounds ambitious, and I’m hopeful that Eden Industries can successfully bring some of these ideas to fruition. If absolutely nothing else, it’s pleasant to see a small team working on an RPG that doesn’t feature a retro aesthetic.