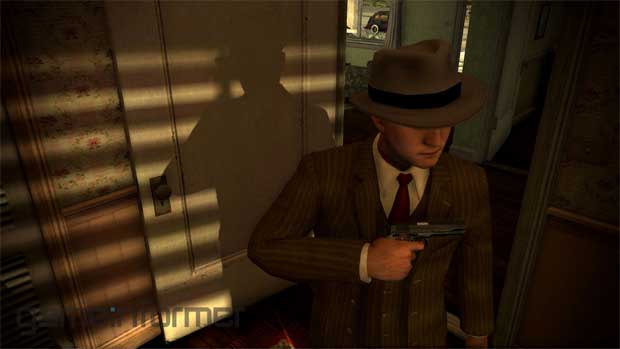 Team Bondi’s L.A. Noire is a reality, and this month’s Game Informer is the proof — a ten-paged spread detailing the game which is rumored to ship this year. The magazine didn’t only just get an exclusive in print, but an exclusive online as well, as it’s published the first five official screens to hit the net.

While it may not be apparent from the screens, Team Bondi’s title is aiming to make a breakthrough in how actor’s performances (and looks) are translated to games. Team Bondi’s Brendon McNamara says that simple motion capture wasn’t doing the trick, instead working with its sister company, Depth Analysis, to design something incredible and new.

The result is a process that captures actor’s performances from every angle, dumping all of those details directly into the game with zero work from human animators. While a single minute of facial animation used to take animators months, the new process can blow through 20 minutes in a single day… and presumably more accurately.

Team Bondi employed 200 some-odd actors to fill the roles of L.A. Noire, which apparently spans 2,000 pages of spoken dialogue. One actor, Mad Men‘s Aaron Statan, will play the role of the game’s lead, Cole Philips. Looks like you can see Statan’s chin in the image above. See? Technological breakthrough.