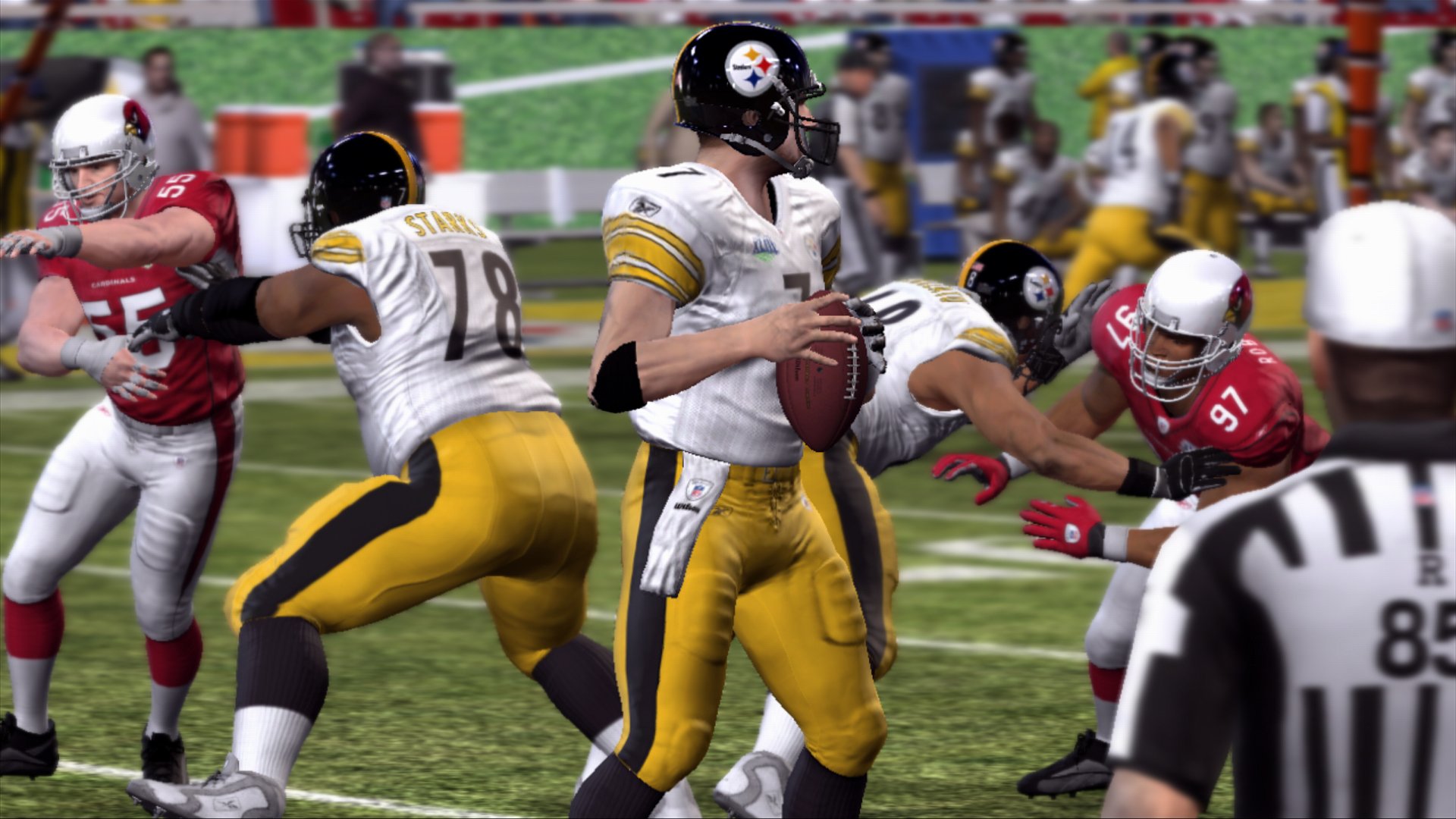 It’s the moment you’ve all been waiting for: Samit Sarkar and Brad Nicholson have spent the past few days playing EA Sports’ Madden NFL 10, and they’re here to give you their initial thoughts. This isn’t the full review; that will be coming sometime next week, after we’ve been able to try out the game’s online modes in real-world conditions.

So what do we think so far — is Madden 10 a new benchmark for virtual football, or is it just another annual iteration of the long-running franchise? Hit the jump to find out.

Right now, I’d much rather be playing Madden NFL 10 than writing this. That sentence alone should give you a good idea of how I feel about the 21st year of Madden football. This is the first Madden game since Madden NFL 2005 back on the PS2 that I’ve had to tear myself away from — and while that’s probably at least partly due to a thirst for football in my life (and anticipation of the impending NFL preseason), I still can’t deny that EA Tiburon has made a damn good football game.

Presentation is one of the key facets of Tiburon’s overhaul of the Madden franchise. The developers strove for a broadcast simulacrum, and it shows. Numerous all-new interstitial shots — such as a pre-game USAF Thunderbirds flyover, and players high-fiving fans while walking into the locker room at halftime — give the game a TV-style look that has never before been achieved in the series. This is complemented by The Extra Point, a show in the Franchise mode in which NFL Network analysts Fran Charles and Alex Flanagan go through the week’s matchups and highlights.

The Extra Point also provides a halftime report, which lists scores and statistics from your Franchise game and others from that week. It’s a nice addition to the series, but it could do with some fleshing out and less robotic dialogue. Still, the show still goes a long way toward bringing your Sunday TV experience into videogame form.

Not only is this the best-looking Madden yet — it’s the best-playing one, too. Tiburon’s hard work on tuning gameplay, with the help of new tech for things like gang tackling and offensive linemen that actually form a pocket, brings a more realistic game than ever before. Streamlined controls also improve the experience, as the right analog stick takes center stage for both offensive and defensive maneuvers. For die-hard football fans, pre-snap options abound on both sides of the ball — you can shift your O-line to help with an outside run, and finally, you can once again change an individual defender’s actions.

I have experienced some strange stuttering issues — it’s not a question of frame rate during play, but sometimes, there will be some hitches in the pre- and post-play action. So I’ll stress that I’ve only been able to play for about five or six hours; my feelings might change as I dig deeper. But from what I’ve seen so far, Madden NFL 10 is definitely going to be worth a purchase when it comes out this Friday, August 14th.

Year after year, EA Tiburon does something special with the latest release. I don’t need to read press materials to know that this year’s focus was on realism. It’s a departure from last year’s NFL 2K-inspired arcade ratings and casual friendliness. A stunning amount of new animations have been introduced. Receivers catch the ball with believable fluidity, runners rush with realistic agility, and tacklers crush in a variety of wild ways. A few old unrealistic issues have been tuned as well. Kickoff formations have a single designated receiver and man-chains form if the ball hangs in the air long enough. You can also return missed field goals, as well as push tackles into offensive linemen for greater penetration.

Nothing gets me more excited as an NFL fan than watching the new gang tackling system in motion. Roving defensive players swarm to the ball carrier as usual, but now more than one man makes the tackle, and you’re allowed to fight against the pile with right stick. As realistic as it sounds, it has its arcade moments. Big backs like Brandon Jacobs can push a pile with six defenders a little too far.

One of the classic problems I’ve had is with the lack of defensive autonomy. This year, most defensive movements post-snap are controlled with the left analog stick. For the first time in a long time (since NFL 2K5, really) I feel like I’m an active participant on the defense. I’m no longer just watching the game unfold.

My time with the game has been short. I’ve spent approximately six hours fiddling with the Franchise Mode, playing with the salary cap and generally figuring it out. I haven’t noticed anything new of special value from last year, but I did notice that player training has been removed from the game. You can’t bump your stats through weight lifting, or seemingly, through play. I’m in Week 10 of the first season and none of my rookies have improved — even the ones I rely on and use heavily.

In a few words, I’m happy with this year’s version. It’s better than last year (my review should give you an indication of the barometer), but still not perfect. If you’re a Madden fanatic, there’s no reason to avoid this. It’s not 2007, for sure.