I can hardly believe I finished the demo

Where some E3 meetings have PR people hovering or hands-off slide shows to watch, the meeting with CI Games for Lords of the Fallen was on the other end of the spectrum. There was no briefing or helpful tips, just a station set up with some headphones and a chunk of time to play.

In a way, the meeting reflects the game itself. There was no hand-holding through the short but brutal dungeon. The player is left to figure out how best to approach each room, and the game pulls no punches in terms of difficulty. After around my fourth or fifth death, restarting at the beginning, I thought I would never see the end of the demo, but patience, perseverance, and a little luck got me through it. 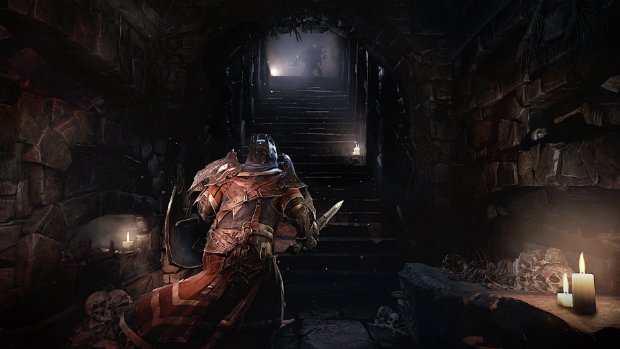 Taking on the role of an armor-clad knight of some sort, I found myself at the bottom of a staircase, with an imposing figure near the top, waiting. I took the time to familiarize myself with the controls, wasting a few potions along the way. A few different weapons have been shown, but I was armed with a staff and a shield. After figuring out the buttons for light attack, heavy attack, block, and dodge, I was ready to go.

Or I thought I was, anyway. Charging up the stairs and readying an attack, I was immediately beaten back by the faster monster. Attacks are extremely deliberate, taking what feels like a second or more between hitting the button and the character completing his animation and actually connecting. Additionally, each action in Lords of the Fallen takes stamina to use, so players cannot string together huge combos, block more than a few hits without being staggered, or roll away if caught in a melee with none left. Stamina does regenerate fairly quickly after only about a second of resting, but it informs how battles must be approached.

Even though the first enemy at the top of the stairs was just a minion in comparison to what would come later, he took out a good chunk of my health, and I was quickly dispatched in the following room, where I was ambushed by two such monsters. After several deaths here, I took the time to reexamine my abilities, discovering a magic attack that deals a decent amount of damage and stuns enemies, but took a couple minutes to recharge. After getting the hang of that, I was able to pare the two enemies down to one well enough, and take the remaining one out with standard attacks. 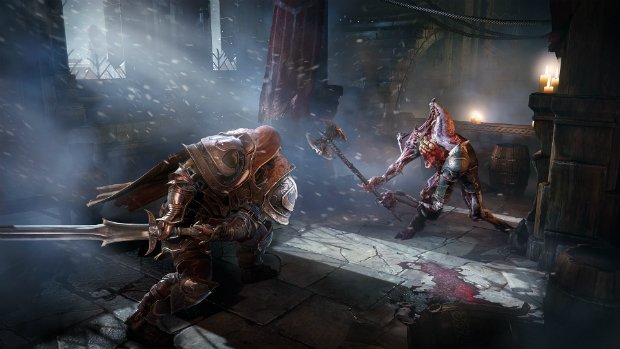 After that room came a hallway with a huge armored figure sporting an enormous shield. It seemed like he blocked every attack I sent his way. After several minutes of dodging and failing to deal any damage, he happened to walk in the center of the room, where a few loose boards gave way, causing him to fall into a pit. In hindsight, the pit was pretty obvious, but my attention had always been focused on enemies rather than the environment previously.

After learning this, I explored the circular room more fully, finding a switch on the ground with an unclear purpose. It turns out to open up a door in the following hallway, where some armor upgrades could be found in a chest. After that boon, I tried the door across the hall, which had a similar chest. This room was another ambush, with a giant spider dropping from the ceiling.

The spider killed me another half dozen times, each time sending me back to the beginning, forcing me to go through the previous rooms and enemies first. In addition to its regular attacks, it could emit a poisonous gas, and drop smaller spider enemies nearby. I was nearly ready to give up, but on my last try, I was able to kill it. 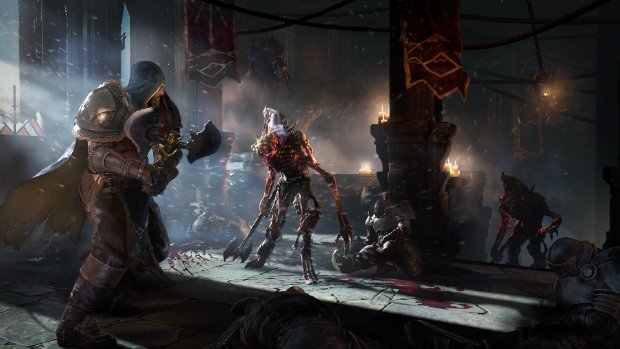 Further on were more of the small enemies and another big guy to lure down into the hole. Further still was a third, but he would not follow me back to the pit. Fortunately, the demo’s single checkpoint was right before him, so I was able to experiment freely. Failing to defeat him I eventually resolved to run past him and hope not to have to deal with him. Even after finishing the demo, I do not know how to take those enemies out in normal combat.

Fortunately, he did not follow into the next room, which was clearly the set up for a boss battle. The boss appeared, an inhumanly large man with pointy armor called the Champion. He had a sizable health bar, but also a visible stamina bar like my own. With that, I realized that all of the enemies were probably governed by the same restrictions as the player, and the key was to cause them to waste stamina before striking to avoid a counterattack.

The boss fight itself was arduous. He had a few ranged attacks that I learned to dodge, and a charge that would send him hurtling into a wall if I jumped out of the way at the last moment. These were the only opportunities to safely land a strike, and as the fight went on they became fewer and further between. By the last half of the fight, I had only a sliver of health left, so I could not take a single hit without dying. Still, after about fifteen minutes spent on the fight, with utmost care taken, I was able to land the killing blow. I realized then that my heart was pounding and my palms were sweating. I breathed a sigh of relief.

In retrospect, the boss fight was not really difficult in the classical sense. All of his attacks were telegraphed with ample time to react, and the timing windows for dodging were fairly wide. The windows for landing hits were not, so greedy play would be punished, so in the end it was more a battle of attrition than one of pure skill. The rest of the demo can be viewed similarly; once the player knows where enemies show up and how best to avoid damage, he can make slow, steady progress. Still, I felt accomplished and relieved to have finished the demo. Lords of the Fallen definitely left an impression on me, with its oppressive world, fights that all demand maximum attention, and the thrill of just barely scraping out a victory in the face of defeat.