If you’re like me, as soon as you saw gameplay of the upcoming free-to-play PC mech game, Hawken, you not only wanted to play it — you needed to play it. Everything just looks so right. I’m a huge proponent of playing a game before fully judging it and I’ll say this up front: Hawken delivers.

During PAX East, I left the convention center and headed over to a swanky bowling alley known as Lucky Strike to get my hands on Hawken, alongside many fans invited to the event as a result of referring many others to the beta sign-up.

The game was set up to be a 6v6 match, with rounds lasting around ten minutes or so. I played two rounds and afterwards got to sit down and talk to Jason Hughes, the producer of the game.

There were four classes of mechs to choose from: Light Close, Light Ranged, Medium Close, and Medium Ranged. Jason assured me that there will indeed be a Heavy choice, as well, once the game launches. Personally, I prefer a close up fighting style in all of my shooters, so I chose Medium Close right from the start. From there, I had three choices for my primary weapon and three choices for my secondary weapon. Each of these weapons behaved very differently and luckily I could swap weapons while I waited to respawn. Eventually I found the two weapons that suited me best and really got into my groove.

The weapons had the appropriate punch when firing them. Firing off my secondary cannon sounded and felt like it was doing some serious damage (which it totally did). On the flip side, when I got hit by some of the harder hitting weapons, I felt it. Felt it real good. I found myself physically cringing after being hit by a barrage of missiles because I felt like I was the mech itself.

Let’s talk about movement. The movement of the mechs is something that has to feel right in a game like this. Walking with the Medium sized mech felt appropriately heavy; I felt as if I was a large, hulking mech. You can speed up with a dash in a single direction by holding Shift if the situation warrants it, though. The best part about this dash is that when you stop dashing, the mech stops and wavers a bit while it centers itself again. The amount of authenticity that this seemingly small detail adds to the gameplay is tremendous. Once I dashed up to a fight and was ready to start smokin’ dudes, but had to wait for a second or two while I readjusted; because of that, I lost a potential kill. It might come off as annoying in text, but trust me, I wouldn’t have it any other way. 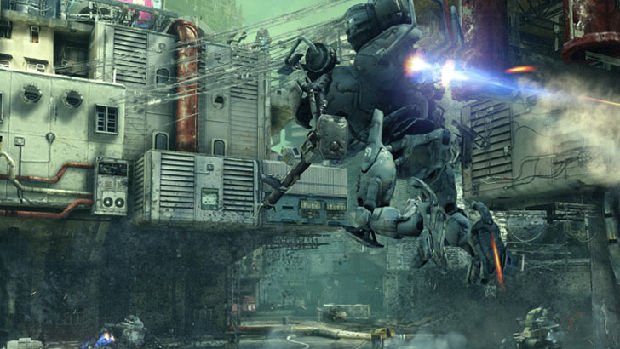 I did play the smaller class for about half a round and it was definitely more agile. You can fly up in the air for a small amount of time and the maneuverability afforded to the Light class is quite noticeable. I equipped some long range weapons and approached each encounter completely differently from when I played as the Medium Close mech. I went for a more hit-and-run style of fighting, due to my relatively low HP. It seemed to work out okay, but it just wasn’t my jam.

Every mech had the ability to self-heal by holding down the C key, but it made you incapacitated for the duration. It’s a risk vs. reward mechanic at its most basic level and yet it still creates a wonderful sense of tension as you constantly question yourself, “Oh jeez, what if this isn’t the best spot to heal?!” It’s a nice touch that I didn’t necessarily expect to see in the game

There were also items that each mech had, which I completely forgot about until Jason reminded everyone that R launches your selected item (at which point about eight items were haphazardly thrown). There was a damaging grenade (in function, not in looks), an EMP, and a deployable turret. I tried to constantly remind myself to integrate these into my fights, but I often found myself using them at inopportune times. It wasn’t the game’s fault; I’m just a pretty forgetful person and my attention was more focused on making sure I fired both my secondary and primary weapons whenever possible.

I talked to Jason a lot about the decision to go free-to-play. Chances are if someone were to look at the game in action and see just how gorgeous the game’s visuals are, they would never guess that the game was free. Jason said that with the free-to-play model, they have a lot more flexibility with what they do. The day-one content doesn’t have to reflect any price point since the price of admission is zero. It makes sense, really; it’s hard to complain about content if there’s no barrier to entry. He also made it clear to me that this will never be a pay-to-win game: anything that will have a gameplay effect will be unlockable via experience. 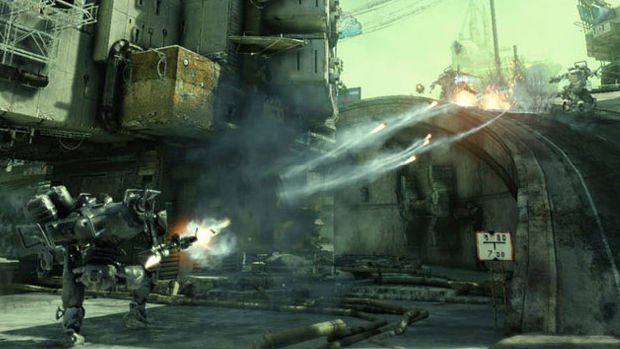 You’ll be able to acquire whole mechs with either experience or real money and once you own a mech, you’re free to mix and match body parts of various mechs to your liking. I asked if we’d see anything other than walking mechs, like using tank treads instead of legs, but Jason pointed out that issues would come up while trying to navigate the maps. There will likely be more types of legs, but sadly tank treads would not quite work.

When I asked about the inspiration behind the visual style, he threw out Blade Runner and Ghost in the Shell. Their goal wasn’t just to create a futuristic world, but rather a “realistic future.” Apartment buildings around the map looked like what you would expect an apartment building to look like in the maybe-not-so-distant future, and I totally got that vibe when I wasn’t in a fight and could truly take in my surroundings.

Jason also explained Hawken’s unique “Siege Mode.” Each team will have a base with the objective being to destroy the enemy base. You can collect Energy by finding it on the map or by killing another player. You can choose to deposit your carried Energy back to your base so that when you’re killed none will be dropped, but the drawback is that you’re not out there collecting even more Energy. Once you collect enough Energy, you can launch a massive ship called the Destroyer. This ship will help you push forward and destroy the enemy base. The twist is that once the Destroyer is launched, the game becomes a Capture Point map, with a single point. If the defending team has the point, it will be easier to defend and take down the Destroyer. If the Destroyer is killed, it drops a massive amount of Energy and can be launched again by the same team. In fact, each time the Destroyer is launched (up to three times), it becomes more powerful and harder to take down. Oh, and the bases have turrets set up in them. Jason seemed really excited about those turrets.

The Siege mode sounds like it’ll require a good amount of teamwork to pull off successfully. I can see teammates covering each other as they return to the base with Energy or making sure they’re all around to collect the massive amount of Energy dropped by the Destroyer. To me, Siege mode appears to be the more serious of the modes that I’d play exclusively with friends, while Deathmatch and Team Deathmatch are more along the lines of quick solo fun. 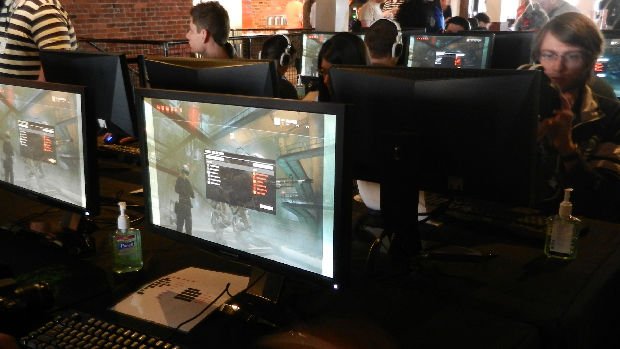 I feel like Hawken is the playfully cute girl in class. I’ve been eying her up for a while because god damn is she good lookin’. Then I got to hang out with her for a bit! Be still, my beating heart! We had a great time and things were going well, but before I knew it, we had to go our separate ways. Now I’m here to say that all of those wonderful things that you assumed about her are true. So the next time you get the chance, grab onto her. Grab onto her and don’t let go.

Hawken drops 12/12/12, but for now you can sign up for the upcoming beta over on the official site.