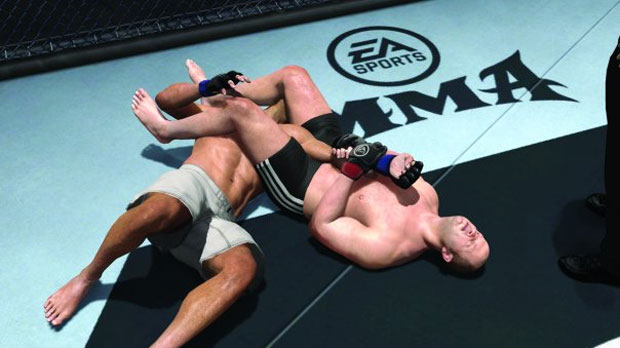 Pick up the latest issue of Sports Illustrated and inside you’ll find some stuff about sports, yes. But what you’ll also find is a single screenshot of EA Sports’ upcoming mixed-martial arts title, the cleverly titled EA Sports MMA.

Unless you’re Samit or you got a subscription to Sports Illustrated for the swimsuit issue or that free football phone, chances are you didn’t see it in the magazine. Trust me, I get it. But fear not, because — look up! — that’s it right there. Yup, that’s not a photograph of photograph of one dude pulling on another dude’s arm; that’s a screenshot of EA Sports MMA (as posted on the game’s Facebook page), a game where you’ll be able to make a dude pull on another dude’s arm.

No, it doesn’t reveal much about the title itself, but damn if that doesn’t look like a real photograph of a dude pulling on another dude’s arm. THQ basically destroyed retail with UFC 2009 Undisputed, so it’s going to take more than pretty graphics — EA Tiburon (the team working on the game) had better have something else up its sleeve.

If you’re a fan of mixed-martial arts, what are you looking for in EA’s MMA game that THQ hasn’t already brought to the table?