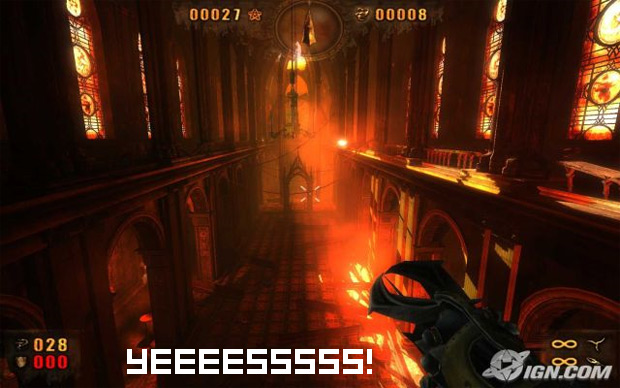 Thanks to an IGN preview, we now know that a sequel to Painkiller exists, and what the next Purgatory-themed first-person shooter is going to revolve around. Coming to us from Homegrown Games, Painkiller: Resurrection starts off with you accidentally blowing up a school bus with C4. Hardcore.

As you might have guessed, the Painkiller (weapon) makes a return, as does the “Heaven vs. Hell” storyline. This time around, however, there will be more emphasis on working for and against the two factions.

Resurrection will also allow two players to tackle the campaign cooperatively (exactly what the series needs), and has multiplayer that features the same enhancements the famous PK++ mod for Painkiller added to the first game.

What really attracted me to Painkiller was its simple yet fun “shoot everything that moves” philosophy that can also be found in games like the original Doom and the Serious Sam series. Boring filler? Nowhere to be found. It was just you blasting away at demons and explosive barrels with some crazy weapons, and that was all it needed to be.

Here’s hoping this sequel will stay true to that formula when it releases on PC in Q4 of this year, and possibly gets ported to Xbox 360 later on.