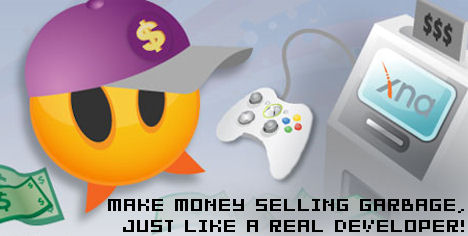 I’m all for supporting indie developers, but there is a reason that hardly anybody in the media is talking about the Xbox 360 Community Games channel, Microsoft’s XNA-led indie game portal. That reason, in case you didn’t notice, is that nearly everything on there is pure, unfettered, stinking trash.

I’ve really tried to keep on top of the Community Games thing, but every title I’ve tried so far has either confused, alienated, or outright disgusted me. The day I drop 200 MS Points for Kitchen Wars is the day I agree to look after some money from a deposed Nigerian prince. Nevertheless, some people actually have paid for these games, and Microsoft has revealed its first Community Games sales chart.

400 point wordsearch game Word Soup tops the list, but the real shocker is the fact that Colosseum made the list at number four. Sure, it’s one of the few titles that actually looks like a videogame, but it’s still total crap. Oh well, he’s the top ten:

Wow … Swords and Monsters is on there. If you’ve not played that particular gem, do download the trial at any rate. It’s worth it. Oh boy, is it worth it.