The “Parts Craft” DLC package is a developer-level sprite designer that will allow creators to creator custom wrestlers from the ground up. While FPW already has an excellent character creator, Parts Craft will let players deep dive into the creation process on an almost pixel-by-pixel level, making faces, clothing, entrance attire, and body parts with scalpel-like precision.

These custom parts can then be shared with other players via the Steam Workshop on PC or the FPW Network on PS4. Parts Craft supports external graphics software such as GIMP and Photoshop, and is openly described as having a “steep learning curve” by the developer. It’s not the only steep element of the Parts Craft utility, which retails at a cost of $30. 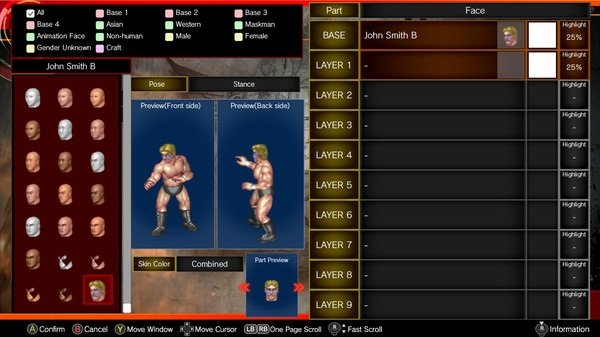 In the bigger picture, updates such as Parts Craft and the upcoming Move Craft are essentially putting the Fire Pro Wrestling developer tools in the hands of the fans. Having already stated that Fire Pro Wrestling World will be winding down its DLC and other updates very soon, it appears that these packages are being presented to guarantee the longevity of the title.

After Fire Pro Returns 2005, the FPW community went years and years without a new Fire Pro release, resorting to complex save file transfer systems in order to keep their game contemporary. So, while very expensive, the Parts Craft and Move Craft packages, combined with Steam workshop, will give the dedicated community members almost all the tools they need to keep the “Fire” in “Fire Pro” burning brightly into the next generation and beyond.