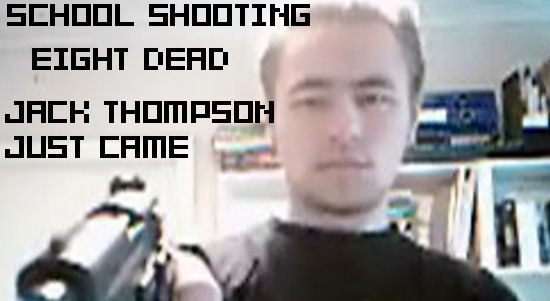 Prepare for a bumpy ride — yet another lonely and pathetic waste of life has taken a gun to his classmates, then himself. I hate when these armed emos do that. Finnish teenager Pekka-Eric Auvinen killed eight students in a suicidal rampage, shortly after his last match in Battlefield 2 — you can bet videogames will be blamed for this one.

Auvinen has, in fact, left a veritable candy store of media for watchdogs and news outlets looking to blame anything other than the wanker who pulled the trigger. Not only was he a big fan of the aforementioned Battlefield 2 and Counter Strike, he was also a lover of violence-themed movies, metal music and the writing of Nietzsche. In addition, he was an Internet user and posted videos of himself on Youtube, declaring himself a natural selector.

So, a field day for certain people — whatever your self-serving and thoughtless agenda, you can have plenty of things to pin this one on, and I’m sure there will be plenty of people willing to use his Counter Strike fandom in the same way they tried to pretend the Virginia Tech shootings were all the fault of games. At least one person is being sensible … or was being sensible — the gunner himself, who said this before the killing spree:

Don’t blame the movies I see, the music I hear, the games I play or the books I read. No, they had nothing to do with this. This is my war: one man war against humanity, governments and weak-minded masses of the world! No mercy for the scum of the earth!

Well … he STARTED sensibly. By the way, eight people is NOT a war, moron.