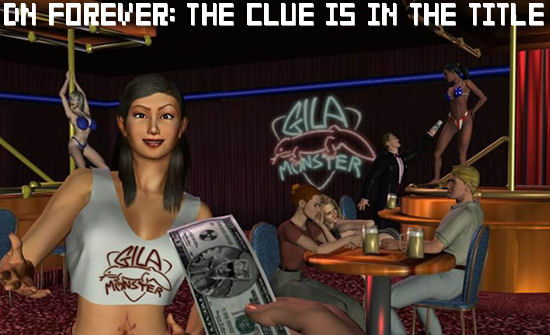 The Destructophone has been inundated with calls today from people keen to tell us that Duke Nukem Forever is (sigh) rumored to be released in 2008. That’s right, a 3D Realms “insider” (sigh, again) is claiming that the vaporware classic is finally going to see the light of day. In other news, I saw the Easter Bunny this morning. He looked at me.

Apparently the game is being given an “over the edge” look and is now “pepped up with attitude.” Elements from the series are being said to return, with the Shrink Ray and Nuke Button rumored to be coming back. Also, this Easter Bunny, he was making out with Santa Clause on a giant flying Phantom console.

Hey, cynicism aside, maybe it IS coming out. Maybe 3D Realms realized that Sadness is threatening to steal the vaporware crown so figured it might be time to actually do a little work instead of sitting down and playing other people’s actual, existing videogames all day.

Oh, and Tupac is alive.