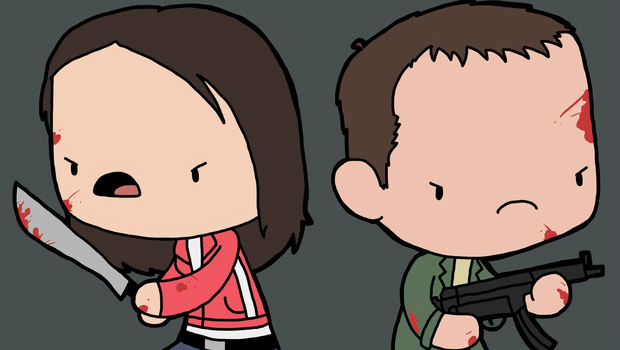 [Destructoid’s own Forums MOMerator Joanna “Zodiac Eclipse” Mueller shares the story of how she and her husband met in Star Wars Galaxies, just in time for Valentine’s Day. I hope you packed your toothbrush, because this is the sweetest thing you’ll ever read! –Mr Andy Dixon]

With Valentine’s Day upon us, I figured it was finally time to share my own personal tale of love and videogames. As anyone who’s ever accidentally brought up the topic of gaming with a significant other while in my presence already knows, I met my husband while playing my first MMORPG: Star Wars Galaxies.

This is our story.

Prior to this time I was an avid console gamer; well, as much as I could be on my limited, college student budget. Aside from compulsively playing The Sims on my laptop whenever I remembered it existed, I spent all my gaming time playing on my beloved PS2. At some point in my college career it was brought to my attention that there were videogames that you could play on the Internet, with other people, all over the world. The idea was fascinating. I got myself access to a proper desktop computer and started my investigation.

A friend from work mentioned that pretty much his whole family was addicted to some hotshot new Star Wars game, and being the nerd that I am, I thought it sounded pretty interesting. Not willing to take the plunge on my own, I talked my little brother into getting Star Wars Galaxies and trying it out. (Since he had actually played some MMOs in the past and knew what he was doing.) Once little bro started playing and deemed the game “awesome”, I picked up a copy for myself and a new graphics card so I could actually play.

At first, I was completely out of my element. There were suddenly so many buttons to remember and coordinating my movements between the mouse and the keyboard seemed rather daunting. Not to mention that this was “old school” Star Wars Galaxies, which meant that after you created a character the game pretty much just dumped you on a starting planet and left you to figure everything out on your own.

I spent a good deal of time wandering, lost, around the wastes of Tatooine. The idea of playing with strangers was a bit unnerving, especially when other newbies wanted to challenge me to some PVP, which I’ve never managed to master. Finally, I got a hold of my brother and told him I was somewhere in the town where all the Womp rats lived, and somehow he managed to narrow that down a bit and came to rescue me. It turned out that while I had been mindlessly wandering about, he’d been doing some serious networking and managed to find himself a guild to join.

The guild was situated on Corellia, and was primarily formed of Rebel players. For the next few nights whenever I logged in to play, I was able to easily find someone wandering around the guild town to chat up, ask for advice, or just go hunting with. It was pretty cool, and I was slowly getting into this whole multiplayer thing.

One night, when I met up with my brother for hunting, he introduced me to the town architect, Lukas, who had offered to help us do some hunting that night. Since we were both ridiculously low level, the poor guy was essentially babysitting. Eventually, little bro had to go to bed, but after he logged out, Lukas and I just found a hill to chill on and sat around chatting for a bit. He lived halfway around the world in Germany, liked cats, and spoke remarkably good English.

Clearly I was interested in learning more. The next day when I logged on, I went exploring around the town and found his house/shop. I snooped around a bit and bought a candle from his vendor robot.

In retrospect, it was a bit stalkerish.

When he logged on later, he tracked me down and helped me get better situated in the town, since at the time I was logging out on the town hall porch like a squatter. He found me a house that someone was moving out of and even brought over some modest furniture so I wasn’t just sitting in an empty box.

It didn’t take long for Lukas became a major part of pretty much all my in-game milestones. He was there when I finally joined the guild. He bought me my first armor (likely so it was easier to keep me alive on missions). He even got me cool house decorations, like Imperial helmets to line my walls. In between adventuring and hanging out with the guild we would spend hours just talking about anything and nothing. 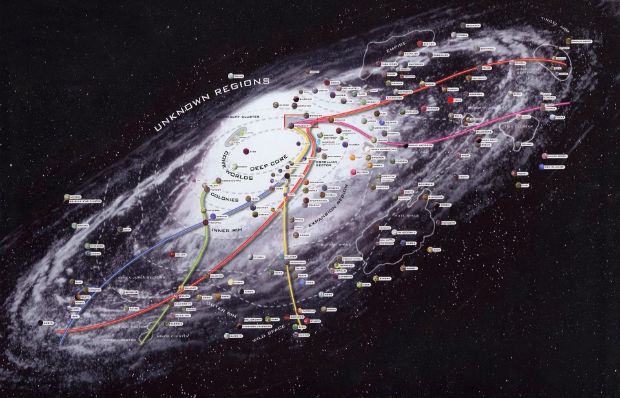 At this point we hadn’t exchanged pictures or anything yet, as I was raised in the days of AOL chatrooms where you didn’t tell anyone anything about yourself for fear of virtual rape. As time passed, though, we got to know each other better and he started teaching me German, while I was always available to quickly explain ridiculous American idioms to him.

Since Lukas was a master architect, he had a huge house in the town; it put my hand-me-down shack to shame. By this time we were spending nearly all our time together anyway, collecting trophies and exploring, so I guess I shouldn’t have been too surprised when he invited me to live with him. Even in-game I recognized this as a big step, but I decided I could afford to indulge myself; I’d secretly always had a thing for guys with accents.

We started chatting on messenger when we weren’t in-game and basically structured our lives around fitting as much time together as possible. At some point he told me that he loved me. It took some time for me to come to terms with it, but I was falling just as hard for him. The first time I ever told him I loved him I did it right before I logged out for the night. Basically, “I love you!” <Disconnected>. Bravery was not my strong suit.

While he was offline for a bit dealing with finding a new place to live and setting up more steady work, I had a lot of time to myself to wander around the gameworld and try to figure out what I wanted to do with this whole, “guy halfway around the world, who I only know through a videogame, is quickly becoming my best friend / possible soul mate” issue. 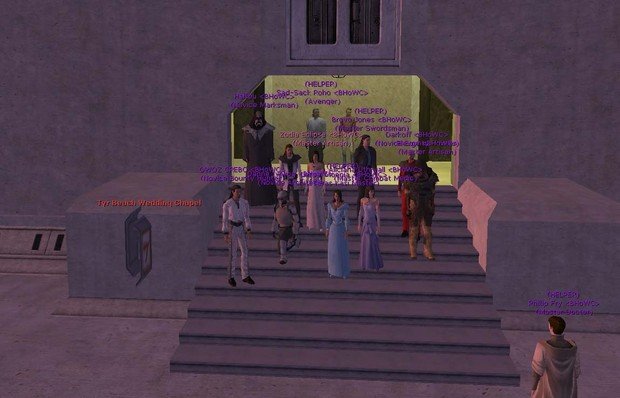 By the time Lukas finally came back to the game with some regularity I decided to just see where this crazy thing was going. We became inseparable. Our characters got married in-game. It was quite the event for the guild and all of our friends pitched in to help get the chapel ready and everyone properly outfitted for the grand event. My brother actually gave me away at the in-game wedding, and my fingers were shaking as I typed out my vows. What had started out as a game had lead to some extremely real feelings between us.

We set up a few summer homes on Naboo, since it was our favorite planet to visit. We were still in the guild, but spent less and less time back on Corellia. Over time, the game changed a lot. The developers were under pressure to compete with the WoW juggernaut and made many questionable changes to the way the game was played to streamline the experience. Veteran players were not pleased and all hell broke loose several times over.

Through it all Lukas and I stayed together and started making plans to meet in person. In February of 2005 I made my first ever intercontinental flight to spend two weeks with him in Germany. Despite everyone at work warning me that I’d likely be sent back in Ziploc baggies, things went great and instead I came home engaged. We spent the next months jumping the immigration hurdles until at last Lukas was able to finally come “home”. We got married in October of 2005 and have been happily gaming together ever since. 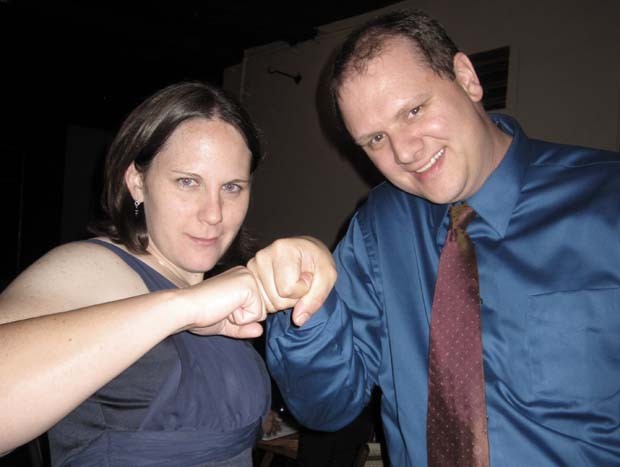 Our current setup is a motley folding table where we have our gaming PCs set side-by-side in the room we’ve dubbed the “Nerd Cave”. It makes for some great co-op moments when we can just glance over at each other’s monitor and see where we are needed. We’re hoping someday when our son is old enough to get him a setup so we can all play together.

Sadly, Star Wars Galaxies didn’t have such a happy ending. The game was officially shut down back in 2011. Even though we hadn’t played for years it was still sad to see the game that brought us together gone for good. We’ve played many other MMOs since then, but we’ve never managed to find one that had the same community feeling of SWG. Maybe we never will.

But I can honestly say I wouldn’t take back those years spent grinding XP, leveling, and loving, for anything.