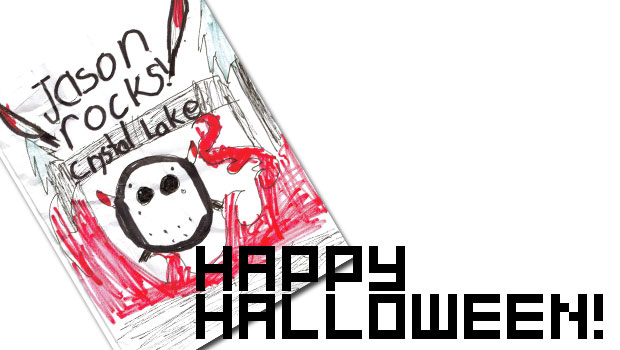 Not to be shown up by the Xbox LIVE Indie game, Pumpkin Carver, 505 Games has something up its sleeve for Wii owners: Halloween Greeting Card for the Wii.

Rated by the ESRB (for everyone, obviously), the game is described as “an activity game in which players can created customize Halloween cards to send to their friends.” On the cards you can put a little character with a Halloween costume, some stickers like a pumpkin or a ghost, and then a nice message.

Like, if you were Michael Meyers you’d write something like: “Sorry I killed my big sister 15 years ago, but now I’m back and I want candy. And many kill some more people.” But in most cases, you’ll probably just settle for “Happy Halloween” or “Trick or Treat.”

No idea if this is a retail game or a WiiWare title, but let’s get real here — would any retailer seriously stock this?Oh, and hit the jump if you want the story behind that picture up there. It’s about as exciting as a greeting card game.

So a few years back, my wife and I had attended a horror convention here in Baltimore. Don’t remember what it was called, but it probably had the word “horror” or “creep” followed by “fest” as its name. In any case, tucked way in the back of one of the smaller vendor’s room was a tiny table, manned by a kid who couldn’t have been more than 10-years-old.

What was he selling? Well, one of his pieces — one which I’d like to called “Jason Rocks! Crystal Lake, Crayola marker on scrap paper” — is pictured above. His sales pitch was pretty strong, too.

“Did you draw these?”

“Are you selling them?”

We gave him a dollar, and while it’s been sitting on my desk for quite some time, I’m glad to finally share it with the world. To the kid who sold us that picture at HorrorFestCreepCon 2007… thanks, and good luck with puberty. We’ll never forget you.