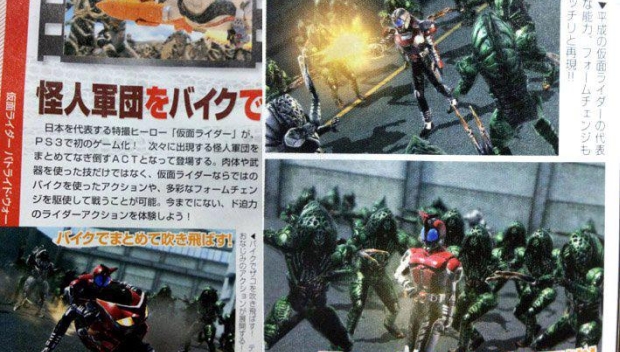 Well, it’s about time! Toei’s Kamen Rider was a Dynasty Warriors before Dynasty Warriors of a sort, defined as it was by a lone hero in a ridiculous costume effortlessly plowing through hordes of weak minions, but only now is it getting a proper release on a current platform, in the form of Namco Bandai’s Kamen Rider Battle Ride Wars for the PS3.

Scans from the latest issue of Famitsu reveal that the game will feature one-against-many combat in the Warriors-series tradition, support for the different characters’ special moves (including form changes), and added emphasis on vehicular antics using each Kamen Rider’s signature motorcycle. The playable Riders announced so far include characters from Kamen Rider Kuuga, Agito, Den-O, Kabuto, W, OOO, Fourze and the currently airing Kamen Rider Wizard. Others are expected as the game nears its May 28th Japanese release date.

At this point the big question is whether or not the game will remain a Japan-only title, since Kamen Rider never caught on in the west, unlike its contemporary, Super Sentai (aka Power Rangers). If there’s one sign of hope, it’s that getting a Warriors-style treatment has proven a cross-pond ticket for a number of otherwise obscure licenses, like Fist of the North Star, and (arguably) One Piece. Let’s hope that the same rings true for Kamen Rider.

In case you’re unfamiliar with Kamen Rider and its rich lore, there’s a bonus video below to help you get caught up, as well as Superhero Time, Japanator’s weekly roundup of all things involving grownups fighting in spandex.