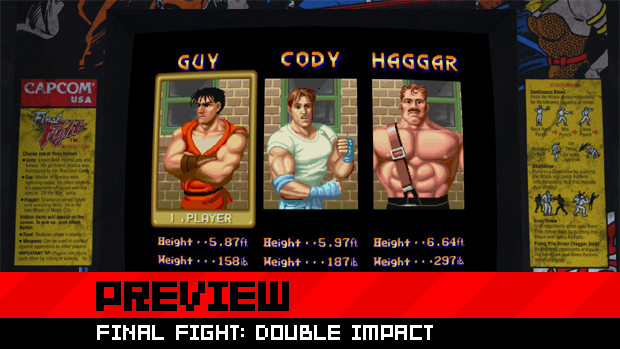 Nobody seems to do retro the way Capcom does it. They know how beloved their old franchises are and they could almost certainly sell them to us again just the way they were, adding nothing. But they tend not to do that, preferring to release updated versions of classic games, introducing polygon-based graphics and other modern conventions to their revivals.

Final Fight: Double Impact is just another example. With alternate graphics filters and a remixed soundtrack (both optional), a bunch of bonus features, an online mode designed to recreate the arcade experience — not to mention two of their best side-scrolling arcade games — this seems like a pretty sure thing.

Capcom sent us over an early copy of the game and I’ve been playing feverishly. Read on for some impressions.

I can’t lie to you. The very first thing I did when loading up Final Fight: Double Impact was play the release’s secondary title, Magic Sword. In fact, that’s all I did for the first several hours of play, finishing the game twice in a row to make up for an immeasurable amount of lost time and quarters. So, I don’t really have any impressions of Final Fight to speak of at this time and my comments will have to wait for the final review next week. 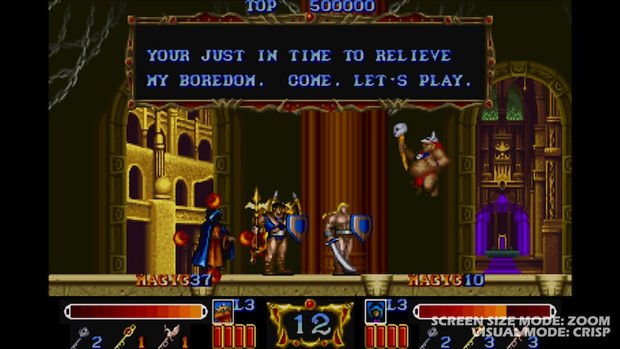 Magic Sword, however, is fantastic. The Double Impact release feels like a perfect port of the arcade version. The big difference between playing Magic Sword in an arcade and on a home console is the ability to pay attention to all the complexity and nuance of the game without pumping in coin after coin. By taking the financial pressure off the user (who’s already paid all they are going to) and allowing for infinite continues, the game allows you to really explore it.

And that’s a very good thing because Magic Sword has a lot of little elements and offers almost no instructions. Not that the act of playing the game is all that difficult. It’s a platformer with an emphasis on close-quarters combat and you can brute force your way through so long as you’re patient. But knowing what the functions of even some of the game’s many power-ups go a long way towards keeping you going on as few credits as possible.

While exploration is a huge part, having some indication of what items do what would have been really appreciated. Just like in the arcade, the only bits of help you’re given come between levels on occasions when the game decides not to further develop the plot (such as it is). The “How To Play” section of the game providesvery little that isn’t already apparent after ten seconds with the game. And the power-ups themselves mostly have background effects that you would not be able to readily identify anyway.

A neat addition are the challenges. These are specific goals to be met while playing and they’re helpfully announced when you reach the relevant point in the game for achieving them. These challenges are organized into tiers and you’ll have to complete some challenges in one tier to unlock the next. It might be forced replay value, but I’ll certainly admit to having discovered some new and interesting things about one of my favorite arcade games through attempting them, which makes them a win in my book.

Magic Sword has been great fun so far, which bodes well for Final Fight. We’ll have a full review of the game next week when it releases.