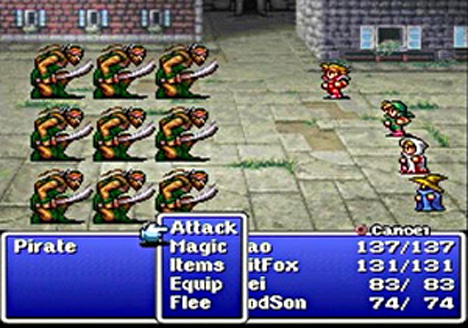 So you liked old turn based RPG battles? Too bad for you. Final Fantasy XIII‘s newly confirmed battle designer Toshio Tsuchida must not be interested in going the way of the dinosaur. Tetsuya Nomura, lead character designer on all three titles of the Fabula Nova Chrysallis Final Fantasy XIII project, confirmed that they will not be returning for the next chapter of Square’s behemoth RPG series. Also, if you can say Fabula Nova Chrysallis Final Fantasy XIII project 10 times without choking on your own tongue, I’ll give you a sandwich. Seriously.

At this point, I think fans of turn based battles may be feeling threatened by their possible disappearance from the RPG universe. Let’s face it: when Square does something, a lot of designers tend to follow suit. There will always be indie designers 100 percent dedicated to the retro path, but this may be a mark on the evolution of RPGs as we know them. Personally, after playing the format of FF XII, I have no issues with losing turn based battles from my RPGs as I found the battles more intuitive and fluid than any previous FF.

What’s your preference — turn based or action style?