Today marks the release of the Alexander raid in Final Fantasy XIV: Heavensward, a pretty monumental day for hardcore players. We’ve all been tirelessly working on our sets, ensuring that we make our way up to a respectable Item Level 170 or above rating, waiting with bated breath for the raid to drop.

Now that it’s finally here, I’m pretty satisfied with what we got and how Square Enix decided to approach it. I also scored a helmet while clearing all four current floors, which is nice! 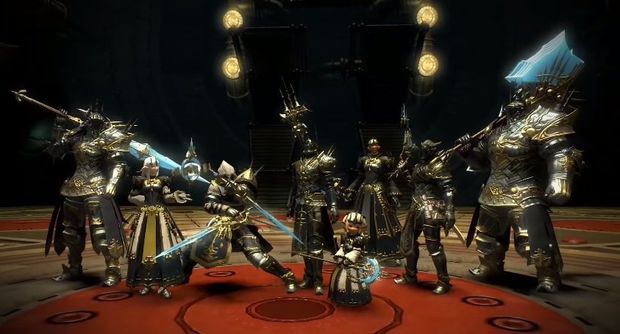 Endgame raids have seemingly undergone a few changes since we last left the Binding Coil of Bahamut in Realm Reborn. For starters, you can use the duty finder to enter Alexander immediately after completing the roughly 10 minute attunement quest — the only thing you need is Item Level 170 or above, and the main story completed. Square Enix noted that they wanted the base raid to be more accessible (with a tougher challenge coming later for static groups), and I think they succeeded with that goal.

There are four wings in all so far (more will be added at a later date like Coil), and the first three can easily be completed with a pick-up-group, so long as everyone is on their toes. The first fight features two mechs which need to be kept apart by the two tanks, the second battle is similar to Turn 4 of the first Coil (lots of adds, but with a fun mech-suit twist for one DPS), the third features a really cool shape-shifting water elemental, and the fourth is against a giant structure that almost feels like a confrontation with Alexander himself. I like all of them in their own way, though the fourth is easily comparable to an EX fight, and will give pick-up-groups more trouble.

Loot is handled differently as well, as every fight drops “tokens” that you can use to acquire Item Level 190 gear in Idyllshire. The accessories only need one token, but the left side armor pieces will need at least two, if not four. As of today, I won two rolls for the head piece token, granting me a piece of headgear — I have two more “lockouts” that I need to complete for the rest of the week, at which point I can’t earn any other gear in Alexander. Theoretically you can get three pieces this week, with one accessory token, one waist token, and two hand tokens (some tokens share loot tables, and the body and legs take four each).

It’s not a perfect solution, but I really prefer it to the old system. Previously, I was raiding in Coil with my old static, and we’d find that we’d frequently get doubles of unneeded gear, leading to some of our group not getting any pieces and falling behind by sheer luck. This is typical of the MMO endgame routine, but in recent years, many developers have implemented tokens to combat this — it’s nice to see Square Enix adopt it, just in time for the new Master Loot system to make raid lead’s lives easier.

The actual design of the dungeons themselves are brilliant, filled with steam pouring from pipes, metallic slides, and tons of personality throughout. It’s a nice departure from the overused Allegan theme of Coil, and overall, I’m liking it a bit more. I also really like the soundtrack, as it gets me sufficiently pumped to take on the new encounters.

I’m happy with Heavensward‘s Alexander raid debut, and Savage mode is set to arrive in two weeks from today, which will bring about the aforementioned tougher fights, more akin to what a typical static group would expect.