It had everything to do with Fat Chocobos

I’m generally not that big of a fan of MMOs. I’ve checked out a good portion of what the genre has to offer, but for many reasons none of the games that I spent some time with could ever keep my interest longer than the beta test/trial period. Not even the mighty World of Warcraft could pull me in like so many other people, and, honestly, it was probably the least interesting MMO I’ve played.

So why is it that I can’t seem to pull myself away from Final Fantasy XIV: A Realm Reborn? 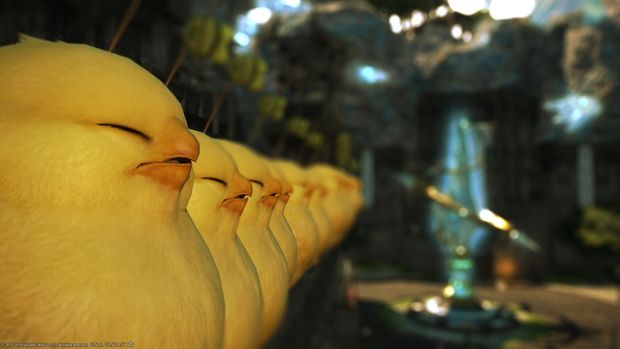 I think my staying away from MMOs comes from a lot of things, mainly stemming from the fact that I prefer both the living room console experience and handheld gaming. It’s what I grew up with, and it’s what I’m comfortable with the most to this day. I’ve also only really ever had gaming computers that were just okay, and usually had trouble running games optimally. Most critically, as a kid it was difficult to convince my parents that a monthly subscription to a game was worthwhile, and — even when I was getting older and could afford it on my own — it became increasingly difficult to convince gamers that it was.

As a console gamer there’s not much to choose from for MMOs; Phantasy Star Online and Final Fantasy XI both come to mind immediately. FFXI I actually did play on Xbox 360 and, before FFXIV, was the MMO I enjoyed playing the most. I didn’t level very far, and I remember it being difficult to me for some reason, but I loved it because it was Final Fantasy. As a huge fan of the franchise, it was cool to check out a world full of recurring elements standard for the series with tons of other players also running around at the same time. From what I can remember, it was still tough to get into because it didn’t feel all that welcoming or really designed too well for a controller. It was almost there.

Final Fantasy XIV was supposed to make its way to PS3, and I was stoked. However, that port was dropped until an overhaul on the game was made, and that obviously eventually came in the form of Final Fantasy XIV: A Realm Reborn on PS3 and PS4. All anyone had to say was Final Fantasy, MMO, console, and I was immediately on board. I expected to check it out, but probably not get too into it (as usual fare for MMOs with me). That changed quickly once I actually started playing. 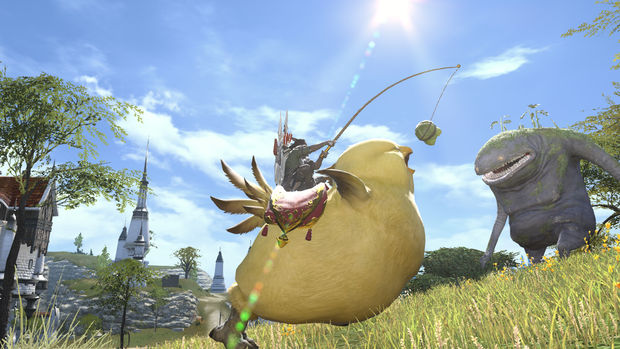 I wanted to check it out on PS3, but it released right around when my semester was starting and I knew the PS4 version was in the pipeline not too long later. So my first exposure with FFXIV was during the beta weekend before the game launched on PS4. In those short couple days, I already had both the Gladiator and Lancer classes at level 20 (the cap for the beta). This was immediately one of the first things that drew me into the game.

Leveling up in FFXIV is fluid, and just doing the normal progression of quests naturally progresses you to the proper level and area you’re supposed to go to next. That’s not to say that is the only way to play, just the way I prefer. There’s no grinding needed (at least in the early-to-mid-levels content), and in fact just doing quests alone over-leveled me slightly. I’m not really down with too much grinding, and would rather just jump in, do some quests, and progress my character with minimal hassle. However, should you need to grind, that’s also done extremely well and doesn’t feel like grinding.

At many points you’ll probably be running across one of the grassy fields in Limsa Lominsa (or any area), when suddenly you’ll see a group of players rush past you with intent. Those people are on their way to a FATE, which is a collection of randomized quests anyone can join/participate in at any point. The more contribution put in, the more experience that is rewarded to that specific player. It’s incredibly tempting to join those FATE groups whenever you see them rush by, and, more often than not, it becomes one of those “why not?” moments. 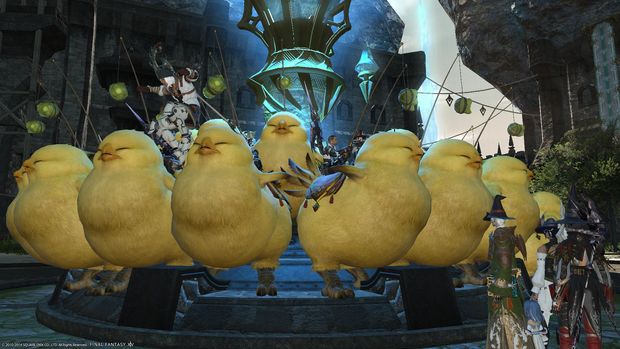 The quests themselves are varied enough to keep it interesting, but they’re pretty standard MMO stuff. Combat really shines as it’s fun to do and quite visually interesting. It also has a nice progression, with early enemies easy enough to just brute force and tougher enemies slowly needing more placement and timing strategy.

Most importantly for me is that it truly feels like a Final Fantasy game. It’s not an MMO with the brand slapped on after, it’s a fully realized world with recurring elements, characters, and beasts as with any other entry. Seeing Chocobos and Cactuars never gets old. The soundtrack feels very Final Fantasy and I like it quite a bit. The world is absolutely huge, beautifully crafted, and still mostly unexplored for me. If you’re not a fan of Final Fantasy I don’t think your enjoyment of the game will hinge on that, but it certainly will add to it. 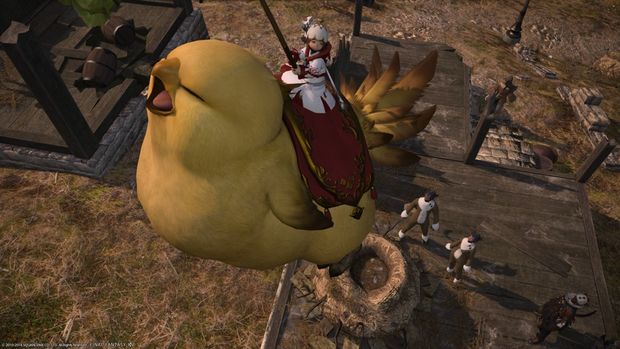 Of course, this all wouldn’t matter if the game wasn’t fun to play on PS4, but that’s definitely not the case. Square clearly put a lot of thought into making the controls feel natural on the DualShock 4, while not sacrificing anything on a controller that a keyboard and mouse can do.

I never feel disadvantaged or that I should be using a keyboard and mouse, but having that option is also empowering. The UI might feel cluttered to someone, but thankfully that’s entirely resizable just as it is on the PC. All the visuals have been turned up to what would be the max on PC, and the PS4 handles it extremely well. In short, the console version lost nothing in translation, and that makes me incredibly happy.

As a huge handheld gamer, being able to pull out my PlayStation Vita in between classes and knock out a couple quests through Remote Play added so much to my enjoyment of the game. Things like first-person shooters don’t work well on Remote Play because of slight input lag, but FFXIV is perfect as it’s not imperative to have precise input. Remote Play is reason enough to pick up the game on PS4 over PC, if you ask me.

MMOs are sort of in a post-subscription era, however the big-budget games still launch with subscriptions. Some suffer for that, but FFXIV is doing quite well with one. That obviously has to do with it being a well-crafted game, but more importantly it probably has to do with the post-launch support. End-game content is being added every couple months or so, and that’s incredibly important to keep players coming back with a monthly $12.99 subscription. It’s great to see Square taking that seriously and giving players their money’s worth. 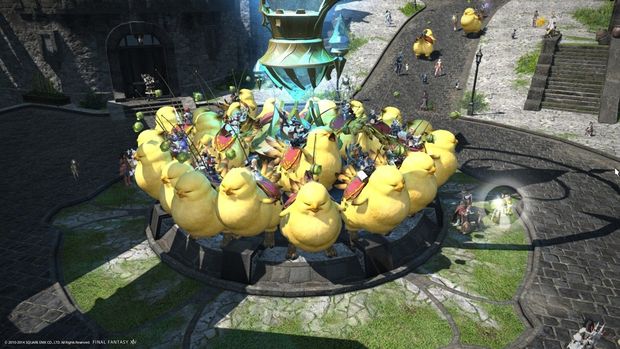 I don’t think Final Fantasy XIV: A Realm Reborn is making me an intense MMO player, and I honestly don’t think that will ever happen. However, it’s a rare MMO that I enjoy playing, and even rarer still it’s one that I absolutely plan on playing for the far foreseeable future. I finally have a true appreciation for why so many people love the genre so much, and I think other players like me can also discover that through this game.

I’ve barely scratched the surface of FFXIV, as I’m still only nearing level 30 on my main class, but I can’t wait to see what the rest of the game has to offer. And beyond that, what will eventually be added in updates and expansions has me excited. Final Fantasy XIV: A Realm Reborn makes it super easy and welcoming to get into, but impossible to put down.

Also, I think I forgot to mention the Fat Chocobo.