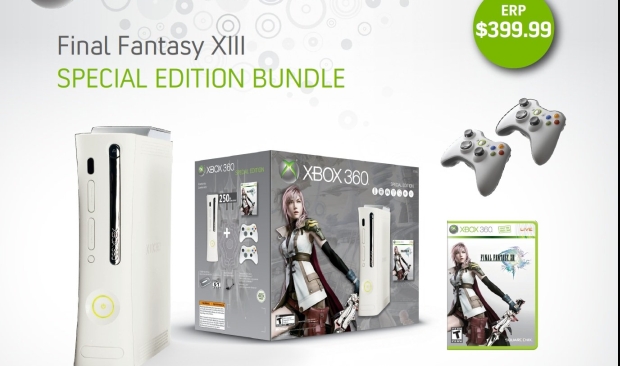 Microsoft’s retail training site, Expertzone, has a listing for a Final Fantasy XIII Xbox 360 bundle set to hit American shores later this year. jmoe316 on NeoGAF found the promo ad which states the system will include a 250GB harddrive, two controllers and a copy of Final Fantasy XIII. The system will go for $399 and the listing says the bundle will be for a black console yet the packaging is showing off a white console.

Microsoft and Square Enix haven’t officially announced this bundle, but X10 is later this week where we’ll probably be hearing more about this along with a ton of new details on Microsoft’s first party line-up such as Alan Wake, Halo: Reach, Fable III and more.

This isn’t a bad bundle, but I can’t help feel jealous as the Japanese only PS3 bundle > this Xbox 360 bundle.