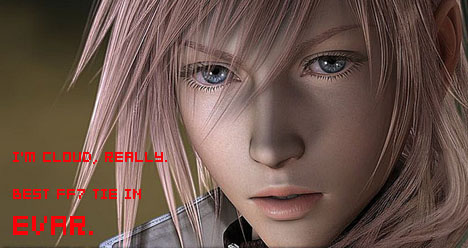 IGN posted the yummy new details, including the names of the worlds in the game (Cocoon and Pulse) and they way they conflict with one another. The female in the trailers thought to be the lead is described as a badass who knows little about herself and is unsure of her real name and identity (Cloud? Anyone?) The story sounds a bit like a mishmash of elements from FF7 and FF10, which is pretty much fine by me since those are two of my favorite titles in this series.

People have been bitching a lot about the similarities of  Final Fantasy as a series lately, and as a long standing fan of the series, these arguments definately got me thinking. I agree that Square work more or less inside the same general universe with these games. On the other hand, so do series such as Zelda and Super Mario, and it doesn’t keep fans from buying those titles. I think of FF the way I think of a series like the Ender’s Game novels – similar universes, but overall, always incredibly high quality. That’s why I always get excited for Square releases: I know the chances are high I’m going to find what they do interesting and worthwhile. I wish I could consistently expect as much from other developers.  Unfortunately they’re busy making masterpieces like Mobile Suit Gundam: Crossfire. Call me crazy, but I go for a good story over juiced up next gen crap every time.