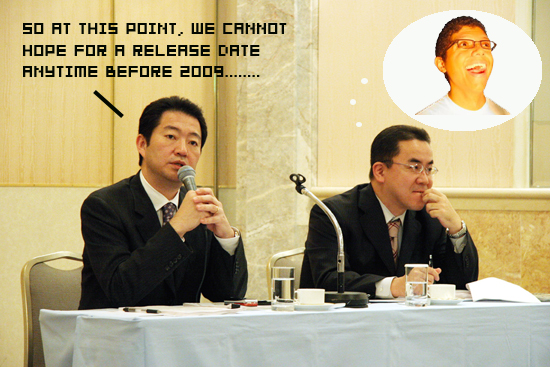 Square recently held their yearly fiscal meeting, which yielded some very distressing news for RPG fans awaiting the newest Final Fantasy with baited breath: The game may not be released until 2009. The trouble seems to revolve around the White Engine, the in-house engine that is being developed for all PS3 titles from Square. Since development of the engine is moving slower than your grandmother, the projections to finish the title have been pushed way, way back.

Good grief, Charlie Brown. Is it just me that sees the irony of Square pumping out FF side projects right and left, yet losing their steam on the next major installment in the series? They’ve gone from being one of the most reliable providers of solid titles to as vaguely dependable as your flaky friend with the bulemia problem. While this is likely a very real issue, it just stings for those of us who feel Square has been jerking fans all over the place as of late (a-hem.)

If you happen to be able to read Japanese, you can read the Financial Report for yourself here.

[Via Games are Fun, Thanks Aerox!]