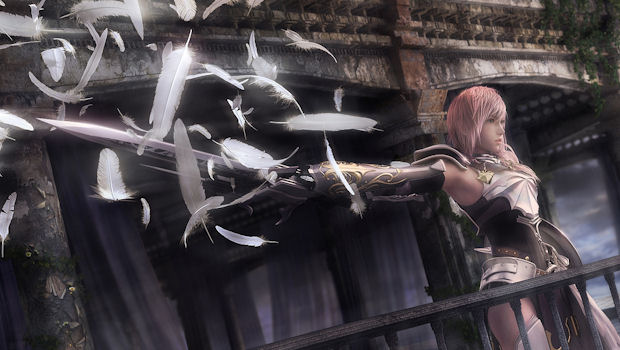 Following this morning’s announcement of Final Fantasy XIII-2, there’s not a lot more information to go on, but we do have the very first screenshot, as well as some quality logo art. If that’s not enough for you, we have a trailer too, at least until Square Enix notices!

The screen shows protagonist Lightning in a slightly more revealing garb than her FFXIII attire, with figure-hugging body armor that wouldn’t look out of place in several Soho back-alley establishments. Not that I’ve ever been to such places.

The trailer and logo reveal that Lightning has a rival this time around. Two attractive ladies with giant swords? I must say, that already sounds like an improvement.

Given my feelings toward FFXIII, I’m skeptical about this new game, but I’ll try to keep an open mind. So long as they spend less time wanking off the art department and more time writing a decent script, it could turn out well.