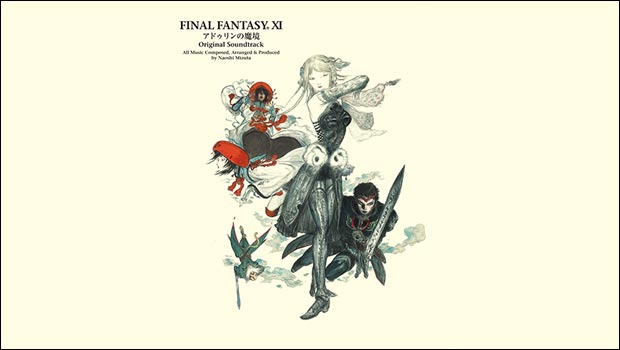 There has been a lot of Final Fantasy XI music released up until now, and while composer Naoshi Mizuta has always been the biggest musical contributor, he’s truly come into his own over the past couple of years. It’s been amazing watching him grow with this title, and while I may never play it, I’ve come to be extremely interested in what he’d be doing for the latest expansion, Seekers of Adoulin.

Square Enix has launched a Japanese website dedicated to the soundtrack sporting three samples. I have to say that his opening track, “A New Direction,” couldn’t be named more appropriately, as the rich symphonic sound is highly reminiscent of Dragon Quest. The album will feature 13 tracks and will be released for 2,000 Yen ($21) on March 27, 2013 in Japan. Pre-orders are currently available from CD Japan where the first press bonus, a cool slipcase featuring artwork by Yoshitaka Amano (pictured above), will be included.

Is anyone looking forward to this expansion being announced outside of Japan? Have you enjoyed the music from Final Fantasy XI over the years?