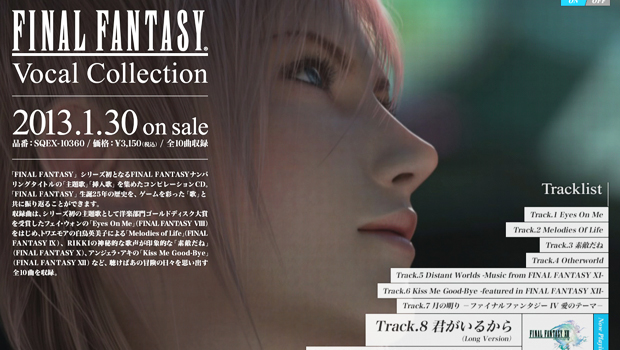 The songs that make you tear up everytime

I was one of the unfortunately masses who happened to miss my chance to purchase the amazing Final Fantasy Vinyls set. Like many of fans of the series’ amazing music, I was totally bummed out. Things aren’t all bleak for us video game music lovers, Square Enix has just released a CD of the Final Fantasy Vocal Collection in Japan.

The ten track CD features some the best nostalgia inducing vocal tracks from the series, including my absolute favorite, Uematsu’s Suteki da Ne —which features the heart tugging vocal work of RIKKI. Fan favorites like Faye Wong’s Eyes on Me, and Final Fantasy IX‘s Melodies of Life are also included. A nice bonus of the new track, Answers from the upcoming Final Fantasy XIV: A Real Reborn is also on the disc.

I had a chance to catch Distant Worlds when it swung by Chicago earlier this year, and seeing Answers live was quite moving. I however, am a bit perplexed by the omission of Koda Kumi’s contributions to Final Fantasy X-2, but it could be an issue of licensing such popular songs. The CD can still be picked up at various Japanese retailers, and should set you back around ¥3,150. This one isn’t coming out of the car’s CD changer for a long time.