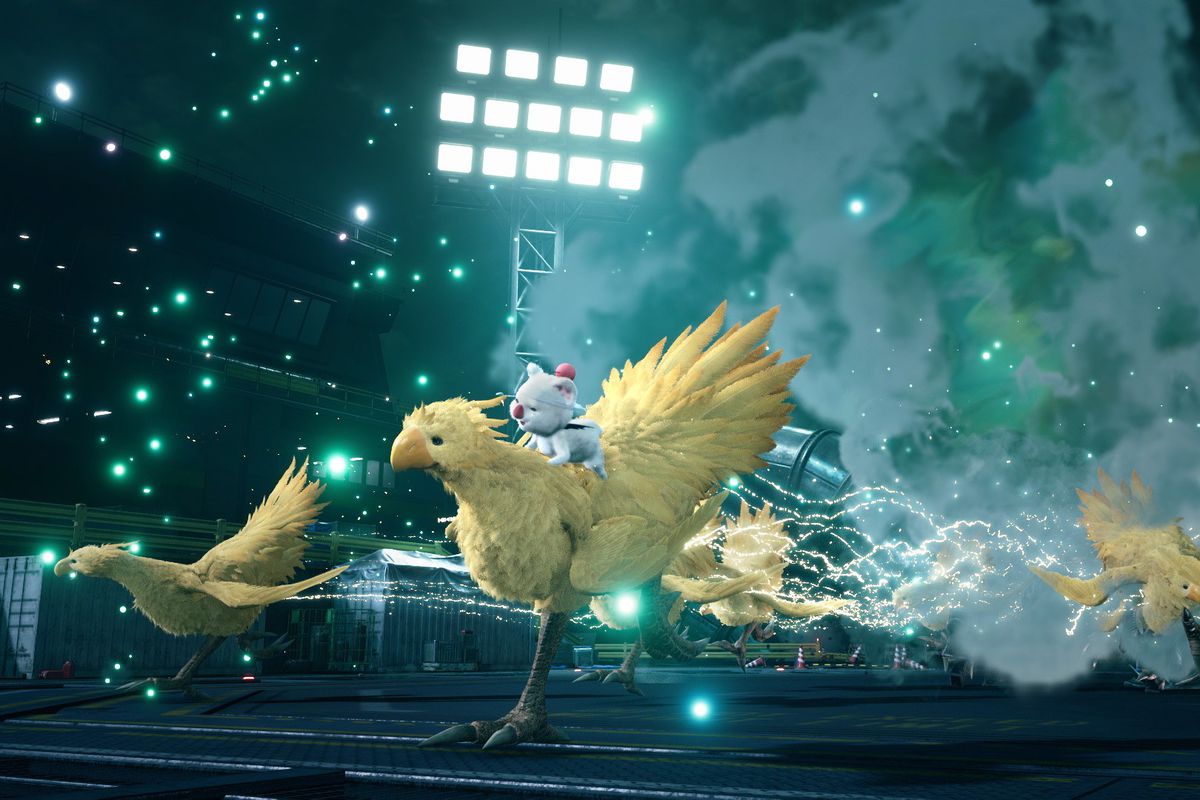 The Final Fantasy VII Remake has at least one summon linked to pre-orders (Carbuncle): we’re not going to talk about those.

Instead, here are the ones you can earn through playing the campaign.

Here’s a bit of text to break out the potential spoiler portions below, though they were mostly already spoiled in trailers for the game.

Each party member gets one “summon slot” that is placed on the right side of their materia grid. Make sure you have each party member, if able, take a summon materia by their side into battle: it’ll give you options for who to summon once a weakness is identified.

To summon something, you need to be in a specific battle (usually boss fights), where the summon bar will appear on-screen automatically. After the bar finishes counting up, you can have one party member expend an action bar to bring forth the summon they have equipped. The summon will walk around the battlefield occasionally doling out attacks, and once its bar is depleted (or its owner dies) it’ll trigger an ultimate attack.

You can also opt to spend action bars to trigger abilities from summons: any party member can do this, even if they didn’t call upon the summon. This is especially useful if you’re summoning something the boss is weak to, as their abilities do not cost any MP.

Ifrit is one of the least surprisingly elements of Final Fantasy VII Remake: he is inevitable.

You’ll unlock Ifrit automatically very early on in the game. Once you hit chapter 4, Jesse will gift you the summon materia as a tutorial of sorts. Slot it right away.

Chocobo & Moogle is your first optional summon. Progress through chapter 6 until you get to the point where you’re turning off lamps to raise a freight elevator. After turning off the third lamp, you’ll have the option of heading to the blue main objective and going on with the story: don’t do that.

Instead, go straight past the marker to take the lift. It’ll bring you to the ventilation system chambers, where you can turn off the fans and have a chance to score the materia. Before you go in just keep in mind: as soon as you hit the button you’ll have one minute to clear out the room filled with two Sentry Rays and one Queen Grashtrike.

To down the Gashstrike quickly, pelt it with its weakness: ice. Make sure you pilot Cloud and use the punisher stance to rain blows upon it and stagger it quickly. To do this more efficiently, spam Cloud’s abilities when you have meter and use Tifa or Barret to hit it with ice instead. Once it becomes staggered it’s pretty much done for after a few Bravers from Cloud.

Dealing with the sentry guns is easier: spells of any kind will take them out, or regular shots from Barret. Swap to Barret right away, use his charged shot ability on a gun, then swap back to Cloud: once Barret’s charged shot is ready to go again, take out the other turret. Their weakness, lightning, will blow them up even quicker.

Once you best the room you need to go to the console on the right side (respective to where you came in) and press Triangle to end the timer sequence.

From there you can enter the door and earn the Chocobo and Moogle summon materia.

You can pick up Shiva during Chapter 8 after you reach the Sector 5 slum hub.

From this point on, Chadley (your materia consultant) will offer periodic “VR missions” to unlock new materia, and the first one is a Shiva boss fight. Win, and you’ll get the Shiva summon materia.

Shiva is a pushover, especially if you equip your party with fire materia.

Just use your strongest fire spell each time you have meter and you’ll take her down quickly.

The Fat Chocobo summon materia can be acquired in Chapter 9 in the same way as Shiva: a VR mission. Just head into Wall Market and speak to Chadley, who has followed you to the new locale.

You’ll get the new VR mission. Face the Fat Chocobo and beat him to unlock it as a summon. Like Shiva this fight doesn’t require any specific strategy: just dodge when the boss jumps up to slam you (its most devastating attack) and keep your party topped up health-wise so you don’t go down unexpectedly.

Near the end of the game you’ll unlock Chadley’s Leviathan challenge as “Challenge 15” if you finished all the others up to that point (in other words, 1-14, up to “stagger effect pt.4”).

If you’re having trouble with Stagger Effect Pt.3 (one of the toughest to figure out), go into the Fat Chocobo VR training simulator with a party that includes Tifa. Stagger the Fat Chocobo, then swap to Tifa and spam Triangle constantly until its stagger bar reaches 200%. You can use this tactic for any enemy, but the Fat Chocobo is very easy and stays staggered for quite a while. Aerith’s Ray of Judgment will also increase stagger percentages.

Simply speak to Chadley to go into VR and fight Leviathan: beating it will unlock it, like the others above.

Unlike other Final Fantasy entries, Leviathan is considered a non-elemental entity (if you scan it, however, the lightning weakness is listed). Leviathan mainly stays stationary, so just brace for its bigger attacks and keep hitting it with heavy attacks and Cloud’s punisher stance. When it becomes pressured, hit it with all of your “focused” attacks to really push that stagger gauge up.

When it starts to cast Tidal Wave, heal to full or buff up as it dishes out a ton of damage.

Like the other VR training summons, Bahamut will arrive automatically as intel challenge 20: after you’ve completed all of the other reports in the game. This should happen near the very end without grinding.

Having trouble with the MP consumption report (18)? Make sure you follow our materia leveling guide to ensure that you’re getting as much AP as possible to max out green magic materia. Revive should be one of the last ones you level up, as it requires a lot of AP.

Once you’ve unlocked Bahamut, simply fight it in the VR missions menu and you’ll earn it as a summon.

To survive a Mega Flare (which is casted when Bahamut’s in-game text counts down from five to one over time), you can use Revival Earrings or bring barrier materia to buff up before it hits. Aerith is also great for keeping the party topped up with constant prayer casts.