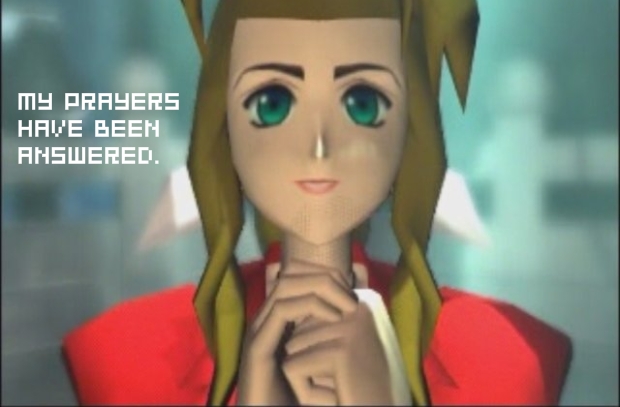 Wait for it. Wait for it. There! Did you hear it? It was the collective squeal of thousands of Final Fantasy fanboys. The ESRB has let slip a little information that Sony was probably hoping to drop on us at their E3 conference. The listing shows Final Fantasy VII for the PS3 and the PSP, so it looks like FFVII on the go is Go. Hell, they might even be planning to drop the game on Tuesday, the day of their press conference, which would be a nice little surprise.

Obviously, rumors have been flying for a while that Square Enix would be re-releasing FFVII in one format or another. The game is the RPG that made Final Fantasy the name it is today and Square Enix has whored it out to no end. Why it took this long to get it out for download is beyond me. There’s no word if anything is going to be revamped graphically or gameplay-wise, but we do know that it will be rated Teen for comic mischief, mild fantasy violence and mild language. If you’ve popped the game in recently, you’re probably hoping they’ve done a bit of a graphical overhaul, as Cloud’s Popeye-like arms are pretty hilarious in this day and age.