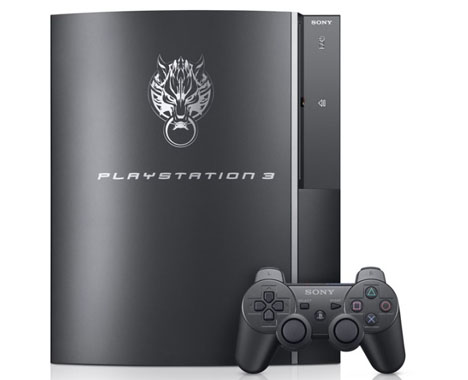 To commemorate the release of Final Fantasy VII Advent Children Complete on Blu-ray, lots of crazy sh*t is going down in Japan. First off, the disc is hitting shelves there on April 16th, and will cost 4,900 yen. You’ll finally get to appreciate this hour or so of fanservice in high definition.

The real news is this Cloud Black Final Fantasy VII Advent Children PS3 bundle. For 49,980 yen (about $550), you’ll get this special limited edition PS3 (160GB!), the Blu-ray disc movie mentioned above, and the demo of Final Fantasy XIII. Dengeki says that this badass bundle goes on sale at the same time as the movie.

If you don’t want the PS3, there’s also going to be a “Trial Version Set.” 5,990 yen gets you both the movie and the FFXIII demo.

Kinda makes you want a FFVII PS3 remake, doesn’t it? I know — let’s not get into that now.