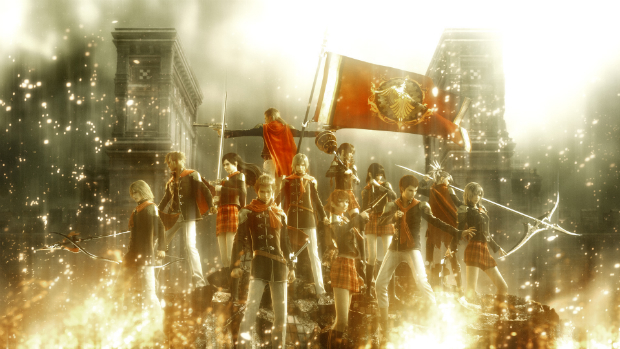 I adored Final Fantasy Type-0 when it first released on the PSP in Japan a few years back. It took me a whopping 75 hours to clear the game my first time, and while it undoubtedly had its fair share of problems (weird RTS sections, poor group leveling system, camera), I felt that the positives heavily outweighed the negatives. It’s not secret that it’s my personal favorite Final Fantasy of the last generation.

In what turned out to be a pleasant surprise, Final Fantasy Type-0 HD appeared on the TGS show floor in completely playable fashion, so I rushed over first thing to give it a look.

The demo pops you into an area outside of a fortress with three characters at the player’s disposal: Ace the card wielder, Rem the dagger user, and Seven with her chain whip sword. Like in the original PSP game, you can swap between these characters with a tap of a button, and you’ll want to be considering how each character controls completely differently. After I made my way into the fortress, I encountered a giant summon creature, an Eidolon, and was tasked with defeating him within a time limit. Unfortunately I failed, which meant I wasn’t able to go deeper into the enemy area through the front door. Instead, I had to flee and take a more roundabout path.

The ten minute demo ended before I could clear everything, but I came away from it with a pretty good idea of what to expect from this remaster version of Type-0. First thing is first: the game is pretty. It’s not quite PS4-level beautiful, but there’s no doubt that they put work into this port. A quick google of the PSP version and a look at the latest trailer should speak volumes. Character models are much nicer, particle effects from all the spells look great, and the frame rate was solid. I was also impressed by the new lighting system in place which does wonders for the more moody locations. My biggest complaint is that some of the texture work and geometry in the levels are very clearly not at the same level as the rest of the assets. As someone who played the living hell out of the original game, this may very well stand out to me much more than a person who hasn’t touched Type-0. Be that as it may, this HD remaster is definitely an upgrade.

Control-wise, the setup of the PS4 pad really improves the experience, particularly in the form of the right stick. The camera in the PSP version of Type-0 could be a major pain in the ass to deal with due to the lack of buttons on the machine, and while it still has some issues even on the new platforms, it’s much less unstable. Type-0 is still a challenging game, though I’ve been told that director Tabata and his crew have created an easy-mode for folks who don’t want to be dancing on the edge of death.

I thought Final Fantasy Type-0 was an impressive game when I played it back in 2011, but this HD remaster has really reignited my love for it. I’m super jazzed to see what other changes have been made come its release in March.