It’s been a while, Vivi

Final Fantasy IX is one of my least-played games in the series. I don’t really have a good reason for that. Maybe when I was younger, a fantastic tale about a monkey-tailed horndog thief flirting with a princess (and every other woman he sees) didn’t seem as appealing as the futuristic settings of VII and VIII. I figured that the mobile release on iOS and Google Play would give me a chance to see why I never quite got on with IX like I did the others.

Turns out, I was a dumb little kid who didn’t appreciate good things. The new HD character models help me realize just how bizarre and joyful the cast is in this game. A few minutes in, you’re waddling around as the Best Black Mage Ever and talking to fish people, hippo people, and rat people. It’s easier to see what they’re supposed to be now, since the PS1 jagginess obscured some of the art back in the day. Unfortunately, the pre-rendered backgrounds didn’t get updated, and in fact look a little jarring against the crisp models.

Even so, I had intended to only play this for a few hours to get a feel for the port, and now I’m ten hours in, planning on playing to completion. This is made easier by new features added in for convenience: at any time you can pause and toggle a speed-up button, the ability to do 9,999 damage, full HP/Trance/ATB bars, or even turn off random encounters entirely. While this may seem to remove the challenge involved, it has allowed me to cut to the chaff of Final Fantasy IX. Instead of grinding through random battles I knew I was going to win, I sped through those and fought boss battles legitimately since that’s where the challenge lays.

You can also choose to have infinite gil, or max out your levels and abilities, but you can’t turn those off and I left them alone. This is sure to affront some people who want to play the game as the developers originally intended, but they can still do that by ignoring these options. Everybody wins, hooray! 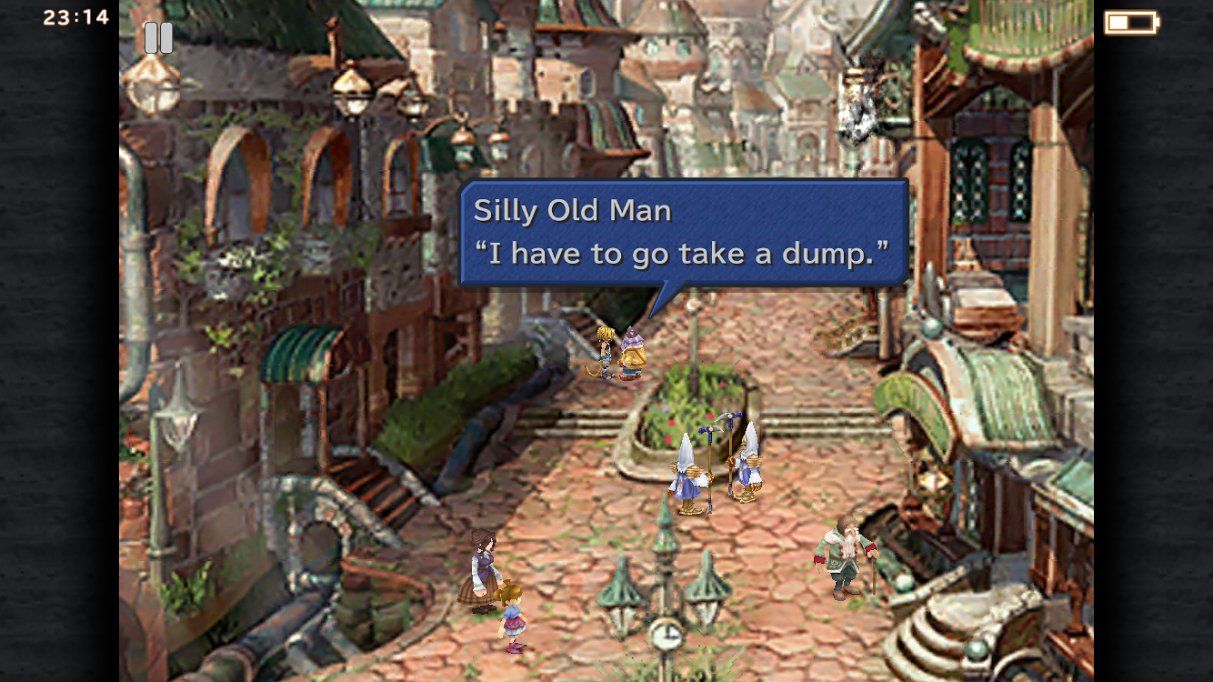 There are only a couple of odd downsides that probably won’t be in the upcoming PC release. When playing on a phone (iPhone 6, here), there are bars on the side to maintain the aspect ration. Though your thumb will likely be inclined to stay close to the edge of the screen, the virtual thumbstick will not engage on these bars. It’s frustrating, but I quickly adapted. When I tested this on the iPad, there were no bars, and therefore no problems. Navigating the various menus isn’t as intuitive as it could be and takes some getting used to. Annoyingly, there doesn’t seem to be a way to toggle the battery meter and time in the corners of the screen.

But! Despite these small problems, I can’t stop playing Final Fantasy IX. I also can’t help but remember exactly who I was when I played it the first time: the little boy who was embarrassed when his grandpa wanted to see the game he bought his grandson. Or the little guy who invited a cute girl in the neighborhood over and proceeded to hunt for treasure on chocoboback while she watched (“Why are you playing a game as a bird?”). Or the curious child wondering why that infamously horrible strategy guide kept directing him to the Internet instead of actually providing tips.

My memory also failed to contain so much of the joy in this game, perfectly encapsulated in the triumphant, bouncy music that swells at every turn. Watching Zidane anachronistically yelling “Yo!” every so often was a bizarre treat. And what fun everyone seems to be having! Final Fantasy has become a dour sort of affair as of late, so it was nice to bumble through some silliness. I know it becomes grim later on, but for now, this is a welcome change of pace, and I hope Final Fantasy XV doesn’t forget to grin once in a while.