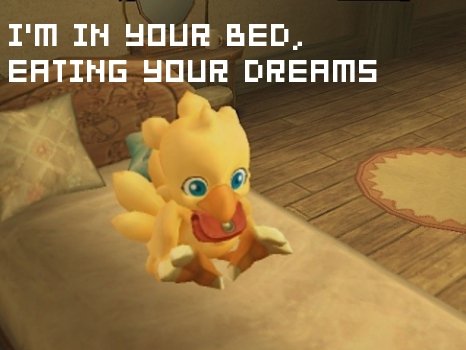 Final Fantasy Fables: Chocobo’s Dungeon is a mouthful. Luckily, it is also an upcoming RPG for the Wii. Today, developer Square Enix gifted the gaming world with 15 new and exciting screens of this loveable little title. Also included in the gallery are all of the previous releases that we missed.

For those not in the know, Chocobo’s Dungeon is about a kid named Cid, who really enjoys chilling with chocobos, who finds himself in a bit of a pickle when all of the denizens of his town lose their memories. The game utilizes randomly generated dungeons and a turn-based battle system. For flair, Square Enix has added a job system, which changes the way the chocobo looks, as well as dungeon configuration.

Final Fantasy Fables: Chocobo’s Dungeon is due out on July 8, and I wonder if we can all get as excited about this as our Colette has been. How many of you are up for some chocobo dungeon-crawling action?