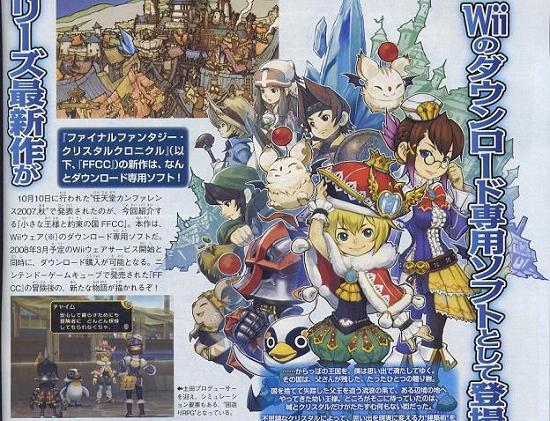 Some new scans from Famitsu (Who else?) have appeared on the ever useful NeoGAF forums, showing off some new images of Square-Enix’s Final Fantasy: Crystal Chronicles: The Small King And The Promised Land, and they’re looking none too shabby at all, quite frankly. The game, not to be confused with Squenix’s other Wii Crystal Chronicles title The Crystal Bearers, is the house of Cloud’s entry to Nintendo’s early WiiWare downloadable game collection, and from current knowledge seems to be a blend of RPG and town building simulator.

Players take on the role of King Leo – who is indeed little – as he sends more battle-ready classes out into the wilderness to collect the elements needed to build and strengthen his kingdom. Depending on the direction in which the city is built (war-mongering, magic-oriented, etc.) new character classes will become available as the realm’s personality developes.

After the horror of last night’s Pop revelation, these screens are a sight for sore, tearful, bleeding eyes, and definitely go a long way to re-associating the WiiWare service with happy and hopeful thoughts. They do raise two fairly important questions though. Firstly, what have Nintendo got up their collective sleeves to make games this pretty work with the extremely limited storage capacity of the Wii? And secondly, why is a $15 downloadable title looking this good when most current full-price third party Wii games still look well below par? Super Mario Galaxy, the aesthetic ass kicking you will bring to Wii developers cannot come soon enough.