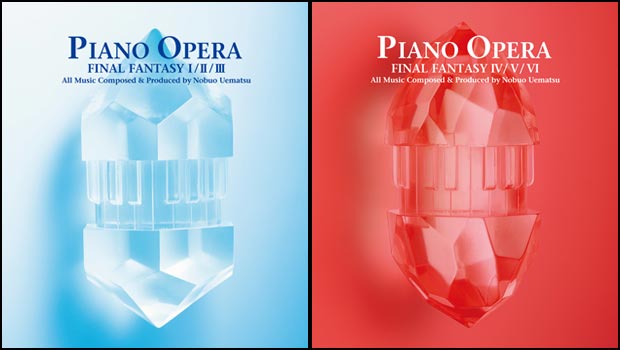 The first is titled PIANO OPERA FINAL FANTASY I/II/III which features 13 piano arrangements of Nobuo Uematsu’s early works and is due out on February 29th, 2012 (an early review of the album can be found on OSV). Of note is the fact that while Square Enix has released a piano arrangement album for nearly every Final Fantasy game to date under the ‘Piano Collections’ series, the first three games never enjoyed this treatment until now. It can be pre-ordered on CD Japan for 2,800 Yen (about $32 USD) those who are interested.

More strange, however, is the second piano opera album titled PIANO OPERA FINAL FANTASY IV/V/VI. What’s odd about this release is the fact that Final Fantasy’s IV, V, and VI already received their own individual ‘Piano Collections’ CD, so it looks like new arrangements and perhaps some multi-game medleys are in the works for this album due out on May 16th, 2012.

These are just two releases planned to celebrate Final Fantasy’s 25th birthday. Are piano arrangement albums up your alley, or are you hoping for a 50 CD Final Fantasy complete music box before 2012 is through?