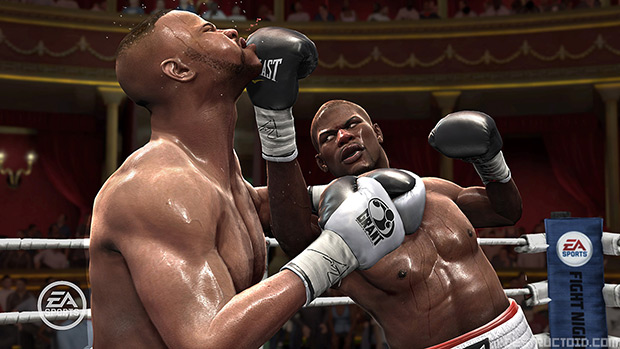 De La Hoya and Pacquiao is one of the 40-plus playable boxers in EA Sports’ Fight Night Round 4, set for release this June on PS3 and 360. Thirty-eight Twelve of the fighters have currently been revealed on the game’s Web site, and you can gawk at many of them in the 15 screenshots that EA has provided for the gallery below. They also sent over a three-and-a-half-minute video featuring Gameplay Producer Brian Hayes; it explains the numerous upgrades of FNR4’s physics system over the one in FNR3.

The video, which is composed entirely of gameplay footage (and Hayes), discusses many facets of the visuals in FNR4, including the game’s dynamic blood and sweat, and by the end of it, I was a tad surprised at how Hayes essentially went through a systematic trashing of FNR3. I guess EA Canada wanted to distance itself from EA Chicago’s creation while proving how far technology has come since 2006. We hear you loud and clear, boys and girls. Let’s hope you deliver on all this promise.

[Update: At press time, there was an error on the game’s site; it was showing FNR3’s roster instead of FNR4’s, which is why it appeared that De La Hoya was in the game. In fact, he has not yet been confirmed as being on the FNR4 roster. We apologize for the confusion. The site now lists 12 fighters, and on April 24th, IGN revealed nine more. –Samit]