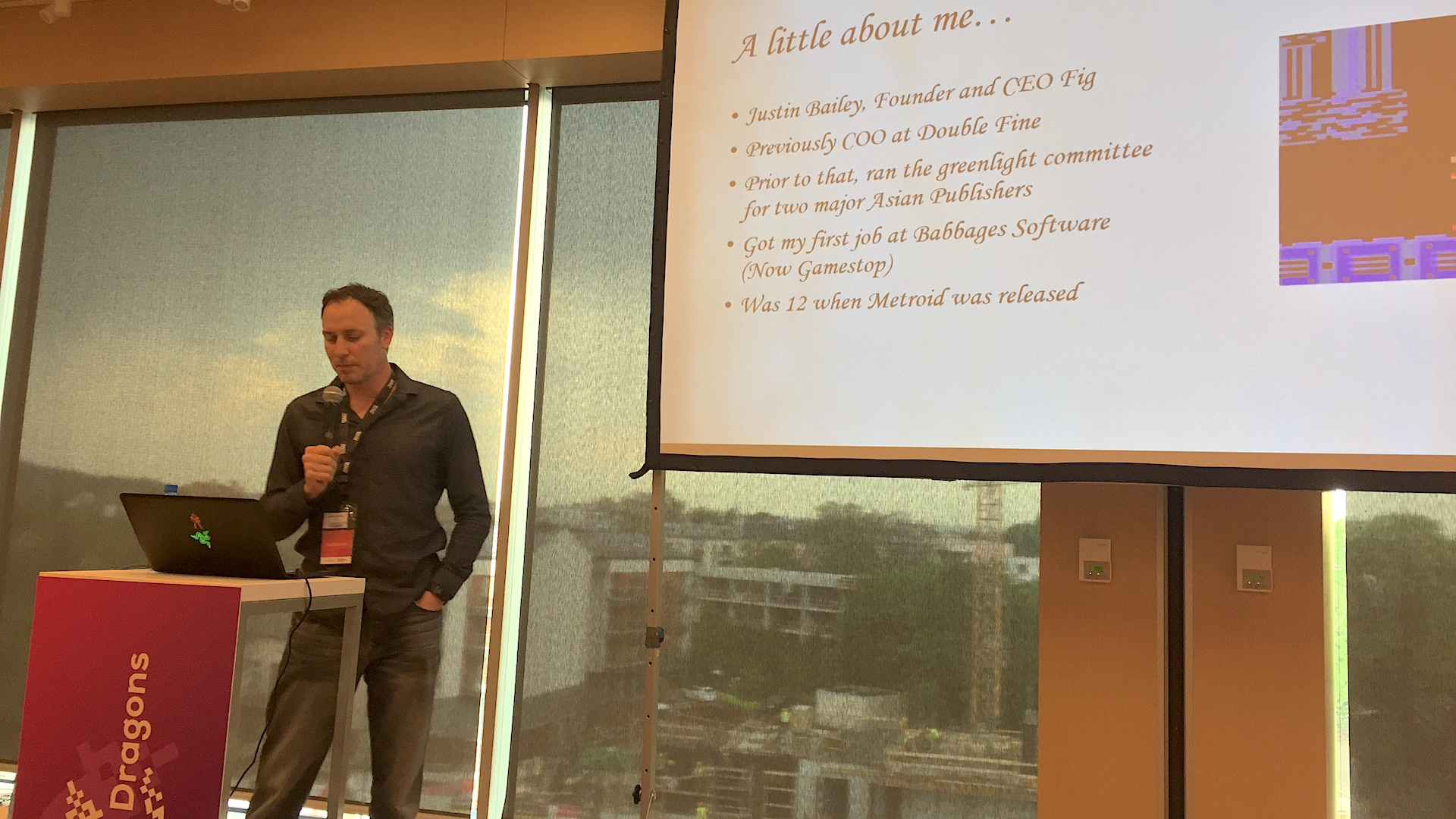 We’re in the ‘Age of Armageddon’

At the Digital Dragons expo in Poland last month, Justin Bailey (not that one), the CEO and founder of the investment/crowdfunding platform Fig, spoke about the decline of crowdfunding. Bailey compared the history of video game crowdfunding to the history of the Ultima games, calling the past two years “The Age of Armageddon.”

Keeping with the Ultima metaphor, Bailey attributes campaigns like the Broken Age or Shenmue 3 Kickstarters to creating the “The Age of Enlightenment,” where many high-profile campaigns earned millions of dollars and garnered worldwide press coverage. Bailey has even seen the current build of Shenmue 3 during a recent trip to Japan. “It’s a beautiful game,” Bailey said. “It looks great.”

“But although [Shenmue 3] was a very successful campaign, the whole narrative of a major publisher, specifically Sony, using crowdfunding to fund a campaign, and them being the ones to profit off it didn’t go too well.” Early rumblings of this exact sentiment first appeared during both Penny Arcade Kickstarters – especially the DLC Podcast campaign, which had a goal of $10. Although neither campaign was for a specific video game, they were both ostensibly video game adjacent considering Penny Arcade’s influence on the video game industry. Bailey argues that Shenmue 3 was one of the factors behind the crowdfunding “Age of Armageddon,” alongside “crowdfunding fatigue.”

“I think probably the worst thing that’s lead to crowdfunding fatigue is a correlation with the actual budget and the campaign goal; there basically is none. A lot of times, when developers are coming up with [a campaign goal], they’re engineering backwards from what they think they can get and then reducing that so they can end up with a multiple on top of that to get press coverage,” Bailey said. “Which leads me to my next part: there’s not as much press coverage anymore.”

Bailey notes that since the explosion of Kickstarter campaigns, press coverage has significantly dropped. Anecdotally, as a reporter for a relatively popular video game site, the word “Kickstarter” in a press release will often ensure I skip that particular email. Not only is there less coverage from press or social media, Bailey also claims there are fewer big-money donors. “This is by no means scientific, I’m definitely going to use some anecdotal parts of this, but the data I have seen indicates the higher tiers have been drying up for the last few years,” Bailey said. “Where people used to throw down a thousand bucks and they’d have dinner with the developer or a party or something, that’s not happening anymore.”

According to Bailey, Fig (which requires games to be pitched, rather than allowing just anybody to launch a campaign à la Kickstarter) was founded partially in response to the decline of charity-based crowdfunding (campaigns where backers receive no monetary restitution based on sales – Kickstarter, IndieGoGo, and the like). “We had the data years ago, we knew where the trends were going to be going, and we knew the narrative of charitable donations was not going to work long-term,” Bailey said. “We saw the evolution of crowdfunding happening, where if you added a way fans could actually get money back from the creators they support, that’s something people wouldn’t get tired of.” 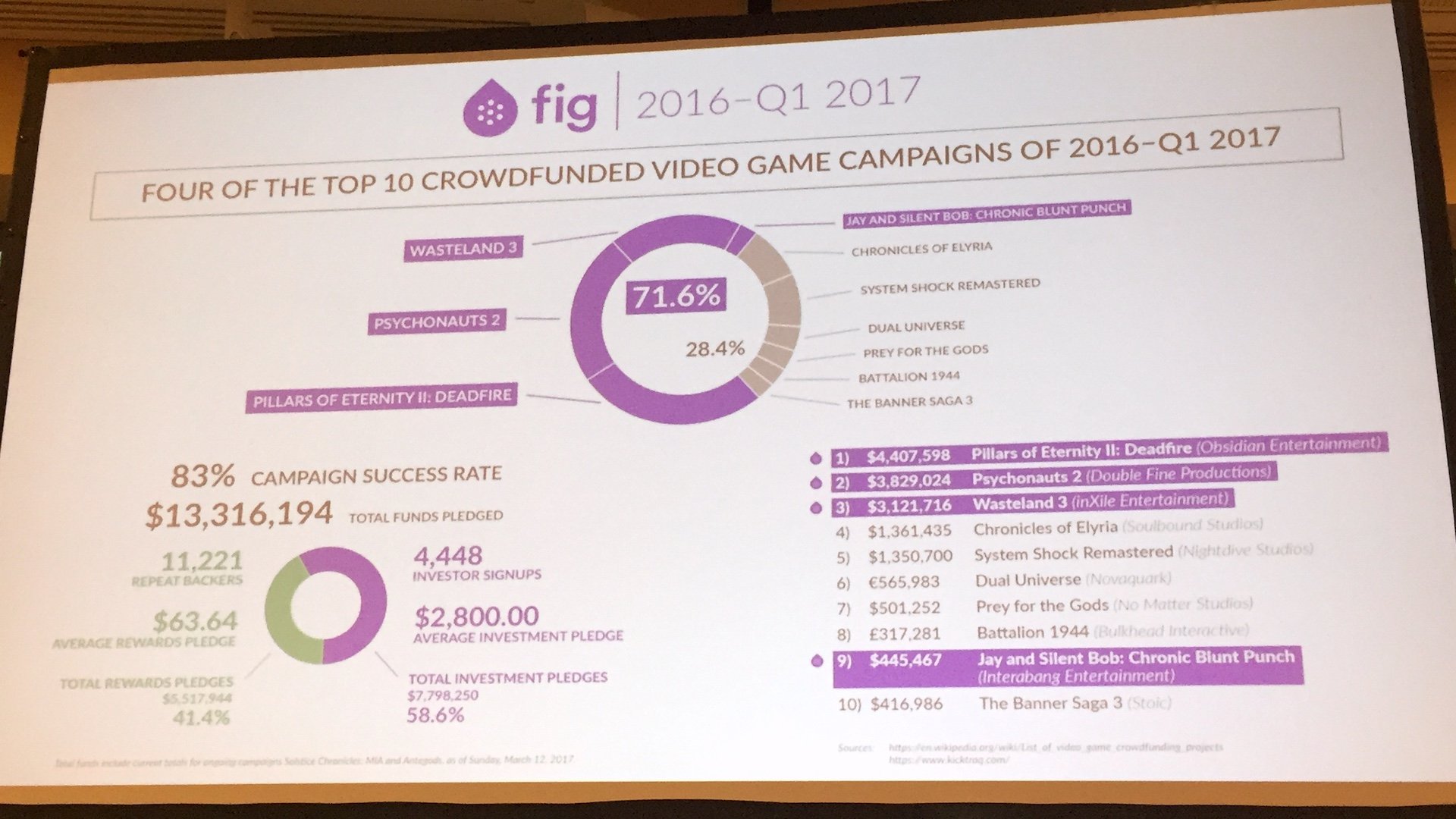 The data Bailey provided backs that up, to a degree. According to the slide you see above, 83% of campaigns on Fig were funded, to the tune of $13 million from backers and investors. Four of the top ten video game crowdfunding campaigns launched between January 2016 and now were conducted on Fig, accounting for 71.6% of money earned by those ten campaigns.

The top three crowdfunding campaigns from that period are Pillars of Eternity 2 ($4.4 million), Psychonauts 2 ($3.8 million), and Wasteland 3 ($3.1 million) – all campaigns launched on Fig, but all sequels, two of which (Pillars of Eternity and Wasteland) are follow-ups to other successful crowdfunded games. By Bailey’s own metrics, Jay and Silent Bomb: Chronic Blunt Punch – a game based on a licensed film property owned by a man with a sizable geek culture following but maybe not so much wide box office pull, making him less attractive to big-money investors – is number nine of ten, with $445,467 earned.

So all four big earners on Fig are unoriginal games. That’s fine – crowdfunding was literally built on the back of nostalgia. And there are plenty of cool-looking original games on Fig, like Make Sail. Bailey told us Fig wants to mix sequels and smaller projects, so the smaller projects can “draft” off the success of the larger campaigns.

But the nine other successful campaigns Fig has hosted (out of 17 total, which is where the 83% comes from) have earned $799,517 cumulative, which is less than the bottom two games in Bailey’s graph combined. (It’s also $6,700 more than Rock Band 4 on PC’s unsuccessful Fig campaign) Since Fig is a relatively young company, it remains to be seen if the site will be able to sustain the series of high-earning campaigns those smaller games would require.

“I don’t think there are enough large studios who’ve used crowdfunding with the current donations/charity only model for the drafting model to be sustainable,” Bailey said in an email interview with Destructoid. “Our premise is that the narrative needs to change, and we need to broaden the appeal for the studios who haven’t.”

Bailey is trying to change the narrative through Fig’s investment-based crowdfunding, as opposed to Kickstarter’s charity-based model. “Donation-only crowdfunding campaigns are kinda like the online form of a Jerry Lewis telethon, and that’s fine for NPR, charity drives, and alt games,” Bailey said. “But when people are funding projects that are primarily commercial endeavors, they should expect to have more than just the consolation that ‘this thing gets to exist,’ but also an opportunity to participate in the commercial success with the creator.”

“I think it will be one of those things in the future that people will look back upon and have a hard time believing that that’s how things used to be – where people actually donated money with no guarantee of ever getting a product, watched the creator sell the company for billions of dollars, and none of it went to the earliest and most passionate funders who made it possible,” Bailey said.

Although Fig has only suffered one high-profile memetic failure (the aforementioned Rock Band 4), it’s nothing compared to the disappointing Mighty No. 9 and Yooka-Laylee; the wholly undelivered Yogventures; or the infamous Red Ash campaign, where the developers secured funding after it became clear they would not hit their funding goal, dedicating the rest of the Kickstarter to “stretch goals.”

Those Kickstarter cautionary tales are part of the reason why Fig curates its campaigns. “I want to protect crowdfunding because I think that’s where you’ll see new, creative ideas. The majority are going to be crap, but the next major franchises will [come from crowdfunding],” Bailey said. “Because we’re doing investment, we have to curate it in a responsible manner, so there aren’t too many failures going through the system.”