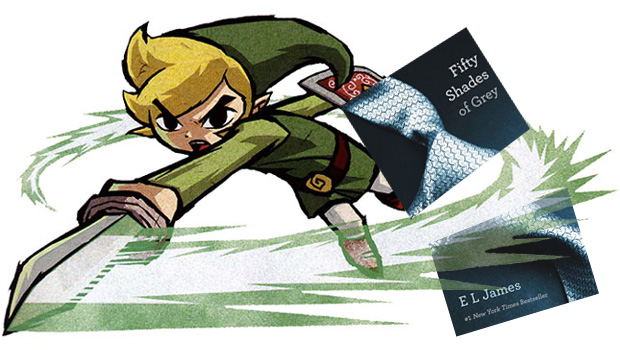 Who says there’s no justice in the world?

Just yesterday, we learned that the highly demanded Zelda bible Hyrule Historia is being localized for the US, UK, Australia, and certain other parts of Europe. I originally used the world “bible” because the book is a comprehensive compendium of Zelda lore. Now I’m starting to think that the religious connotation of the word “bible” is equally appropriate, because the book has just performed a miracle.

Pre-orders have opened on Amazon, where Hyrule Historia is currently marked at a juicy discounted price of $20.99. In but a single day, it was able to shoot to the top of Amazon’s “Best Sellers in Books” chart, overtaking the vile Fifty Shades of Grey trilogy. This is a joyous occasion that deserves to be celebrated with alcohol and promiscuous behavior!

How could so many women be roped into this Fifty Shades garbage? I’ve asked several customers at my local Barnes & Noble why they were interested, and the most popular answer is “it’s what everyone else is getting, so it must be good.” The Fifty Shades series is FACTUALLY worse than the Twilight series. Why? Because it was originally conceived as Twilight fan fiction! That’s not the bottom of the barrel, that’s breaking through the bottom, tunneling deep underground, and rupturing a septic tank.

So thank you, Link and Zelda, for saving literature.