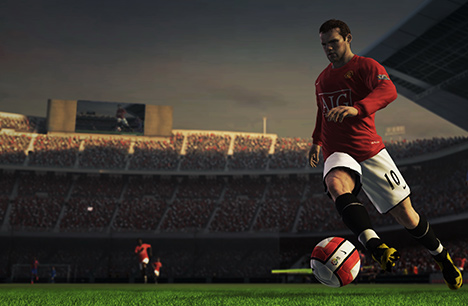 Raise your hand if you’re a soccer fan. Actually, wait — you know what? I’m going to use the term that the non-American world uses, since most of the people who are reading this post and actually care about the sport don’t call it “soccer.” So, where was I? Right, FIFA Soccer 09. In this year’s iteration of the best-selling football franchise, EA Sports is shooting for a “unique gameplay experience” that’s specially designed for the console you’re playing on.

Well, that’s not entirely true — the PS3 and 360 versions will (ideally) be identical to each other, as usual — but the Wii, PC, PS2, PSP, and DS versions will be specialized. EA Sports is touting 250 “additions and enhancements to the core gameplay” for the HD versions of the game. This includes new engines for animations and player momentum (physics). Gamers will also have Custom Team Tactics available for coaching strategy, and the Be A Pro mode has been expanded into something called Be A Pro: Seasons, where players can be chosen or created and then played with in a career mode.

Remember how the Wii version is going to be titled FIFA Soccer 09 All-Play? Well, EA Sports is offering two ways to play in FIFA 09: there’s the “authentic” 11-on-11 sim mode, but in addition, there will be an “over-the-top,” arcade-style 8-on-8 option as well — and wouldn’t you know it, Miis of famous footballers like Ronadinho and Wayne Rooney are going to be involved. Oh boy. Many PC gaming FIFA fans feared for the series’ life after EA Sports canceled Madden and NBA Live on PC, but they can now rest assured: FIFA 09 will be available on computers, and it’s going to feature customizable mouse controls as well as “leading-edge visuals.”

On the PS2, FIFA 09 has a new collision detection system and 500 new animations. PSP and DS owners will get Be A Pro this year, along with a unique Be A Pro camera. FIFA 09 will hit all the platforms mentioned above (PS3, 360, Wii, PS2, PC, PSP, DS) this October. EA’s press release is after the jump; they’ve included four PS3/360 screenshots and four PS2 screens.

PLAYSTATION 3 and Xbox 360 Feature More Than 250 Core Gameplay Enhancements That Deliver Most Responsive, Intelligent and Realistic Action Ever

“We have listened and responded to gamers and soccer fans around the world by building customized gameplay experiences for FIFA Soccer 09 on each platform,” said Andrew Wilson, Vice President & Executive Producer for the franchise. “Everyone wants to play a soccer game that is customized to their system and delivers a unique and enjoyable experience. We understand that and have innovated features, created new modes and designed controls that are tailored to each specific platform.”

With over 250 additions and enhancements to core gameplay, FIFA Soccer 09 on the PLAYSTATION 3 system and Xbox 360 deliver an authentic soccer simulation that enables you to customize the game to suit your style and ability. New animation technology creates more responsive first-time shooting and passing, faster and more controlled dribbling, and improved trapping. New player momentum physics, which exploits the power of these platform engines, delivers realistic player collisions, authentic jostling for the ball, and more variation in tackling.

“We listened to our consumers to make the changes that they wanted,” said David Rutter, Producer of FIFA Soccer 09 on the PLAYSTATION 3 system and Xbox 360. “No other game has over 250 feature changes and additions focused on improving core gameplay. We have an absolutely authentic recreation of the real sport through attention to detail.”

For the first time, go inside the game engine to customize the strategy and positioning of your teammates to decide exactly how your team will play in any situation. With new Custom Team Tactics you have all the tools to become a first-team coach. Adjust and customize tactical settings so CPU players and your team perform just like the real-world team plays and make strategic decisions to exploit your opponent’s weaknesses, all on-the-fly. The popular feature innovation Be A Pro has expanded to a career mode called Be A Pro: Seasons where you can choose or create a professional player and then develop his skills at a single outfield position over four years with the ultimate goal of becoming a national legend. The matchday experience is now true-to-life with a referee and linesmen on the pitch. Plus, crowds, stadium atmosphere and commentary have all been regionalized in exact detail.

On the Wii, enjoy FIFA Soccer 09 All-Play one of two ways—a Wii-specific take on the authentic ’11 vs. 11′ simulation or over-the-top ‘8 vs. 8’ arcade action within a stylized environment with Mii™ versions of your favorite superstars, like Ronaldinho and Wayne Rooney. Refined motion and point-and-play controls make playing FIFA Soccer 09 All-Play even more intuitive and perfectly balanced for gamers of any ability to enjoy fun, soccer action. Choose to play the style that best suits your skills from advanced controls for experienced players to new EA SPORTS™ All-Play controls that enables novice players to focus on fun using simplified controls with AI assistance.

“You’ve never played soccer like this before,” said Kaz Makita, Producer of FIFA Soccer 09 All-Play. “Our new ‘8 vs. 8’ Footii Match enables you to play an exaggerated style of soccer where the personality of your Mii comes to life. You can play with your Mii characters against or alongside some of the biggest stars in a truly unique soccer experience tailored specifically for the Wii version of FIFA Soccer 09.”

FIFA Soccer 09 on PC now features leading-edge visuals that deliver graphics that exploit the power of hi-spec gaming PCs, as requested by PC gamers. Star players are featured in photorealistic quality with remodeled likenesses for ultra-realistic gameplay. FIFA Soccer 09 on PC also features customizable mouse gameplay controls that deliver deeper, more intuitive command over your squad. Plus, customizable widgets are now integrated into the menu system to connect you to the FIFA community and real-world soccer so you stay connected while playing FIFA Soccer 09.

“We are committed to investing and innovating to create a PC specific experience,” said Producer Paul Hossack. “Gamers want a gameplay experience exclusively for PC and FIFA Soccer 09 on PC delivers this.”

With 500 new animation sequences and all-new collision and shielding systems—representing the biggest innovations to the multiplatform EA SPORTS soccer engine in four years—FIFA Soccer 09 delivers more responsive, intelligent and realistic physical action on the PlayStation 2 system. The new collision detection system with 360 degree coverage enables players to behave according to their physical attributes where player speed, direction and strength determine everything from the severity of the collision to the outcome of possession. Changes to the animation system reward the skillful gamer during one-on-one situations between attackers and defenders. Tuned acceleration attributes enable swifter virtual players to possess quicker first steps and gain advantage in sprints. Plus, four new skill moves—scoop turns, rainbow flicks, heel-to-heel knocks and ball rolls—give you a total of 32 tricks in your arsenal to perform just like Ronaldinho.

FIFA Soccer 09 on the PSP system and Nintendo DS now include the innovative Be A Pro feature, including the unique Be A Pro camera that re-creates the rush and excitement of racing in on goal, designed exclusively for each system.

Additional major feature innovations for PLAYSTATION 3, Xbox 360 and PC will be revealed later this month and announced at the Leipzig Games Convention in August.

To learn more about specific features on each platform visit www.FIFA.ea.com.

FIFA Soccer 09, scheduled for worldwide release this autumn, is developed by EA Canada in Vancouver, B.C. It has not yet been rated by ESRB or PEGI.

* Based on total franchise sales in 2007 according to the NPD Group, Inc.