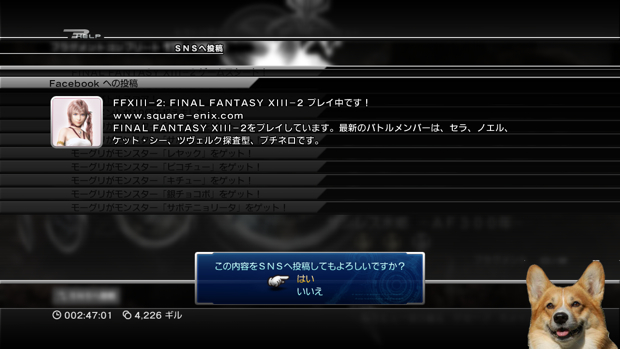 In a bizarre twist of events, Final Fantasy XIII-2 is getting Facebook support. By inputting your social network credentials in the game’s settings, you’ll be able to update your friends on your party structure, story progress, and other useless statistics.

Does anyone else think this is kind of backwards? Personally, I think this idea is far better suited for leaderboards. I like the idea of in-game information staying in-game, and not having to use an additional step to compare stats. It’s much more convenient to see how my friends are doing by using a simple seamless menu while playing, than it is to leave my console and go check a third party website to see what my friends are up to.

But hey, at least it’s better than Final Fantasy’s other “2”, which only really offered super stylish outfits. For more information, check out the official press release after the break.

Greetings!
Square Enix announced today the ability for players to post achievements and trophies on Facebook® as they journey through FINAL FANTASY® XIII-2, now available at retailers.
For the first time in FINAL FANTASY history, players can keep friends up-to-date with their gaming experience via a direct link to Facebook. Once players are introduced to the Historia Crux, they will have the chance to upload information about their progress: including current party setup, monsters collected, battle scores and more.
FINAL FANTASY XIII-2 Key Features
·        A New Tale Awaits
FINAL FANTASY XIII-2 will reveal further events from the amazing mythology as presented in the original FINAL FANTASY XIII. The story is written in a way that it can still be enjoyed without playing the previous title.
·        Larger, More Interactive Environments
Places with multiple pathways to explore and many secrets to find offer players the chance to shape their own adventure.
·        Time Travel – A New Dimension of Exploration
The situation, scenery, flora, fauna and weather conditions all change, depending on when you visit locations. Untangling the threads of time is essential to experience the full story.
·        Enhanced Battle System
New elements, such as visually dynamic Cinematic Action sequences and the Mog Clock that rewards players for their actions, create further variety and choice for the player.
·        Master of Monsters
A wide variety of more than 150 different monsters inhabiting the game world can be recruited into the player’s party and battle strategy, with each creature having unique and devastating special abilities.