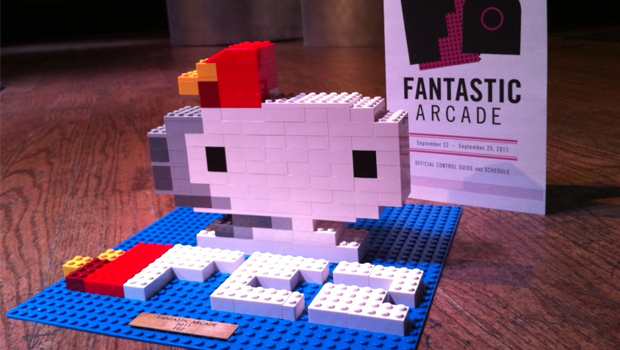 Another year of Austin’s annual videogame festival Fantastic Arcade has come to an end, but not without a couple winners, losers (haha!), and pissed-off Norwegians. Seriously, don’t make eye-contact with them. They will mess your sh*t up.

The biggest winner is also the most predictable one: Fez takes home the Audience Choice Award along with a neat Lego statue. Faraway (by Little–Eyes) won the Best in Show award, which would be pretty impressive if I knew anything about the panel of judges.

My game of show? GUN BULLET! Pinballz Arcade were nice enough to bring its cabinet to the show and set it on free-play. I played it obsessively over the past couple days.

For those of you foaming at the mouth for some quasi-3D indie-platforming action, word has it that you may have to wait a while longer. Fez is saying, “Screw you” to 2011 and moving to an early 2012 release date. Damn, now we’ll never know if it would have outsold Skyrim!

Once I get done flunking out of college and typing up some film reviews for Flixist — which you better read everyday for awesome movie news — I’ll have the rest of my Fantastic Arcade previews up for you all to read, including a first look at Serious Sam: The Random Encounter and what may be Pixeljunk’s finest game yet (hint: It’s not 4am).