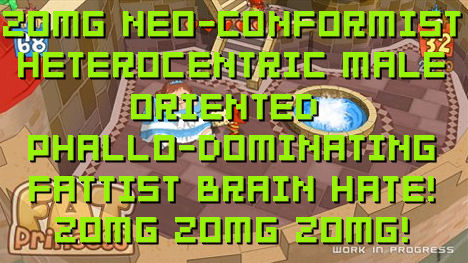 This is classic. Proving that you can’t dare to say or do anything these days without it offending someone, a bunch of gamer feminists are up in arms over the “fat-bashing” PSN game, Fat Princess. The game’s premise is that the princess you must rescue has been stuffed so full of food, she now needs a team to haul her copious backside to safety — according to some mini-Germaines out there, that’s simply not on.

Even worse is a writer at Shakesville, who took time out of doing her husband’s laundry to write this: “Congrats on your awesome new game, Sony. I’m positively thrilled to see such unyielding dedication to creating a new generation of fat-hating, heteronormative assholes.” As you can see, she uses “words” like “heteronormative” to sound clever and informed, a tactic which invariably fails and makes one look presumptuous and pretentious.

“What I can’t figure out is why anyone would want to rescue a fat princess in the first place, since everyone knows that fat girls are unlovable human garbage at whom any sensible bloke would sooner hurl invective than cast a longing glance.” Word to the wise: Sarcastic fat girls don’t go to the prom!

It should be no secret to anybody that I’m a fat guy myself, and I’m certainly not offended by this game. Perhaps I’m just too heteronormative to understand the terrible evil that this game represents. Or maybe self-styled “feminists” who think that the movement is all about getting angry and using buzzwords are simply retarded. Who knows?