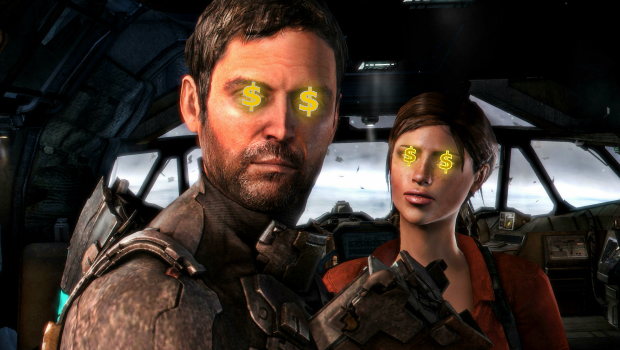 We crown a term for microtransactions in full-priced games

In the wake of Dead Space 3 getting microtransactions, one thing that’s been lingering in the minds of gamers is the question of what we call this new and growing business model. Dead Space 3 is one of several retail games adopting a free-to-play model, except it’s not free.

Final Fantasy: All the Bravest is built entirely on the idea of freemium content, but again costs $3.99 to get into before charging you cash at every single turn. It’s become clear that “free-to-play” just doesn’t work in games that cost cash, especially now that $60 games are having the audacity to do it. So, what snappy business name do we have? It’s simple — Fee-to-Pay.

While free-to-play games let you get into the core game for nothing and then attempt to coax you into purchasing additional content, games from the likes of Electronic Arts and Ubisoft instead make you pay for the privilege of getting into a position where you’re tempted to pay more. Hence, you’re charged a fee now to pay later.

The model likely isn’t going to go away soon, since it appears to be working for now. Eventually, consumers will grow tired of it and the market will evaporate, as happens whenever publisher swarm in on an idea and exploit it to breaking point. Until then, fee-to-pay seems to be the perfect name for their enterprise. Use it in good health!