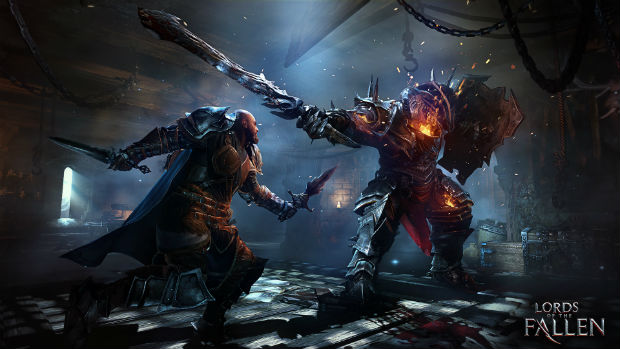 These souls are dark

Lords of the Fallen is a action-RPG in the veil of Demon/Dark Souls. Instead of the constant hack and slash of the old action-RPG days, Lords of the Fallen continues the tradition of Dark Souls by focusing on smaller-scale tactical encounters. Enemies will not be the skeleton sword fodder of old, but will be your physical equal as you attempt to clear a path to your objective.

As the playthrough shows, defense will be as important as offense as you dodge under swords to try and get the killing blow. The game features three customizable class archetypes, including a cleric, warrior, and rogue which players can build upon to create the character that fits their style best. Weapons can also be customized to envoke magic to deal more damage against enemies.

Lords of the Fallen will also feature a New Game Plus system so players can beat the game again and again with the difficulty, items, enemies, and other features changing each time.

You can check out the game when it’s released for the Xbox One, PS4, and PC on October 28th.

Filed under... #City Interactive#Lords of the Fallen