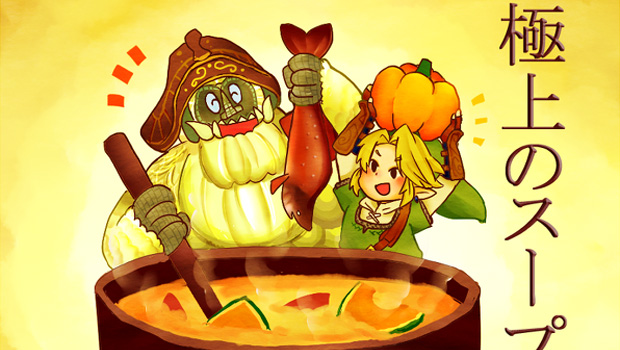 This week was one of my busiest weeks in recent memory. I was so loaded that I fell way behind on a lot of cool videos and doodads I wanted to share. Bear with me as I play catch-up.

Jimmy Wong and Ashley Adams’ Feast of Fiction returns to the Zelda universe for a concoction based on Yeto’s Soup from Twilight Princess and the Pumpkin Soup from Skyward Sword. The key ingredients are pumpkin (of course) and goat cheese — thankfully, the duo wisely left a substitute for reekfish out of the recipe. Although, it would have been interesting to see how they would have incorporated seafood in the cuisine.

I tried goat cheese for the first time a couple months ago, and it’s pretty strong stuff. It’s got a very powerful bite, which I found difficult to stomach for long. Maybe the pumpkin flavor complements the cheese in a way that lessens the punch, but I’ll remain wary until I can try this recipe for myself.