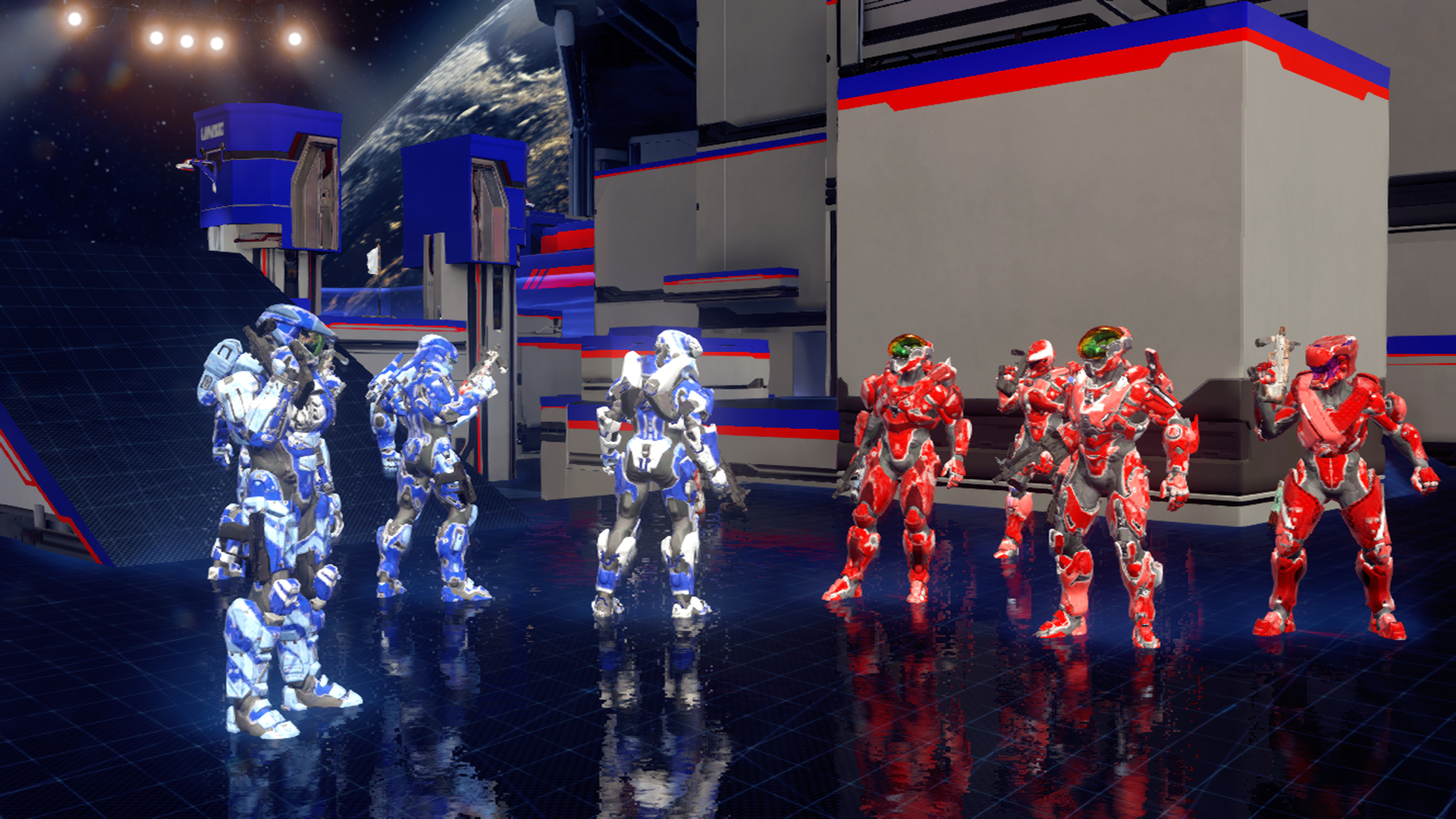 Or how I learned to love the Breakout

“Fuck this stupid fucking Call of Duty bullshit. Get your shit together, Bungie…er…343, whoever!”

This is how my first night with Halo 5 ends, in a fit of rage after a kill-less losing streak in the game’s new tepidly received Breakout mode. Breakout is a small arena-based four vs. four game type where spartans have no shield and one life. Capturing a flag or eliminating the opposing team nets you a win. Win five rounds and you win the entire match. 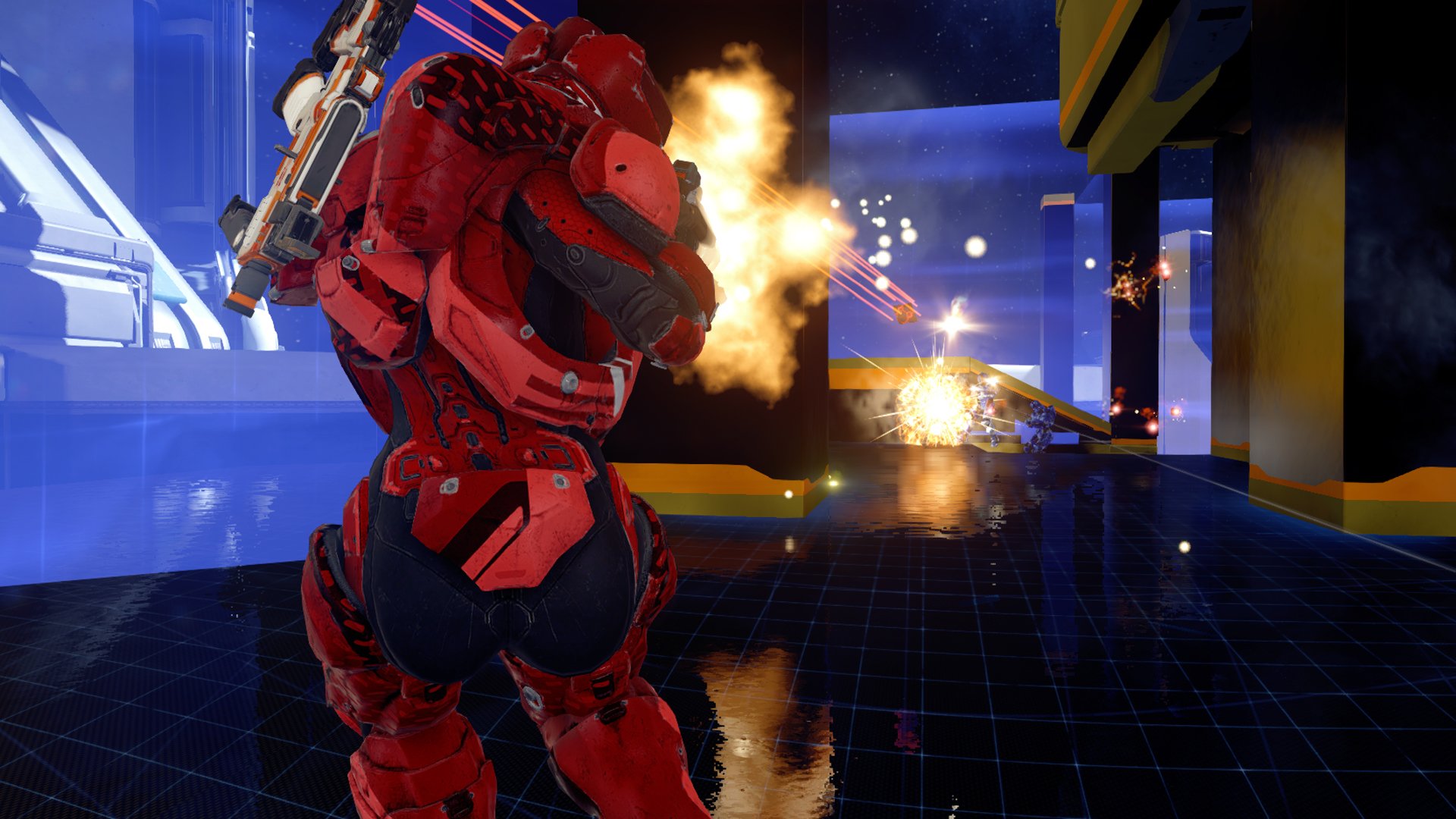 Anyone who knows me on a personal level knows I love Halo; I’ve played every game at or before launch, no matter the means necessary. While the hype train has been in full force for Halo 5 for months, I’ve stayed out of it. I hate getting hyped up only to be let down, and after the disastrous launch of The Master Chief Collection, I had little faith in 343 not screwing up Halo 5.

At E3, I even purposefully avoided playing the build available there, though I had played and mostly enjoyed the beta earlier in the year. I say ‘mostly’ because it went from being fun and fresh yet familiar, to quickly catering to the screaming minority of MLG players that eventually lead to Halo 4‘s multiplayer being ruined when 343 heavily changed the balancing to favor the battle rifle, the go-to gun for wannabe eSports E-thletes. Suddenly the beta was all battle rifles, all the time, just like many of the game types included in The Master Chief Collection. I hated it.

Almost every Halo game has launched with the default guns being assault rifles and the pistol, or something similar. The battle rifle was considered a power weapon that had to be collected from the map. Halo was a mad dash to obtain power weapons and to remember when they would respawn so as to grab them before your opponents. Not this starting with the best weapon in the game bullshit.

Fast forward to just a few days before launch: I’ve avoided basically all hype and news regarding Halo 5, aside from thoroughly enjoying the amazing Hunt the Truth audio series. Then I slipped up and watched a video on REQ packs by GreenSkull, a popular Halo YouTuber. As much as I don’t like microtransactions I have a thirst…neigh…addiction to opening blind packs of cards brought on by my obsession with Hearthstone. My hype meter instantly went off the charts. I couldn’t wait. 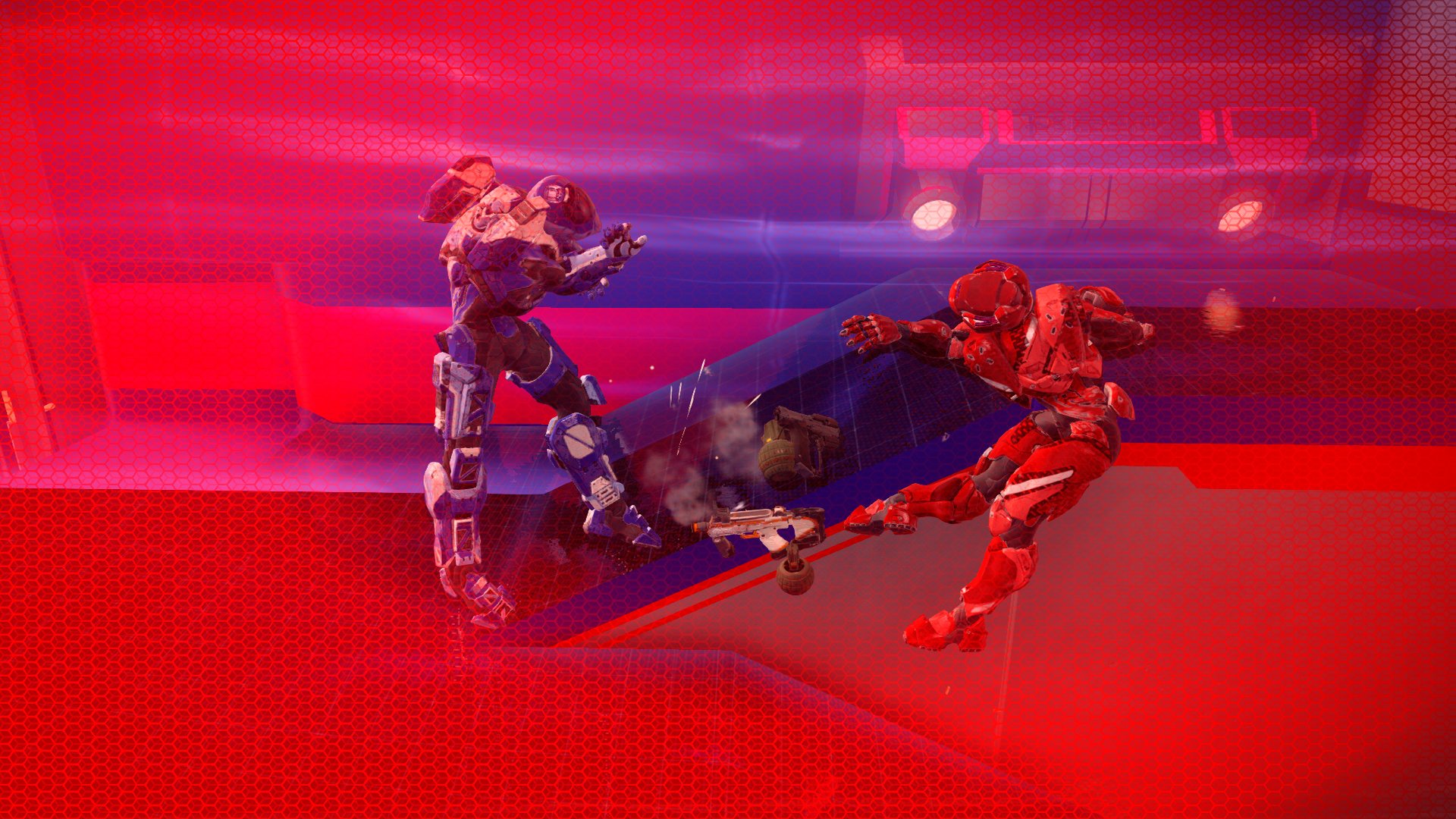 Midnight hits. My boyfriend and a couple of friends set out to finish the campaign. I typically play the campaign on the Normal difficulty, but my friends insist on playing on the game’s hardest mode, Legendary. After about three grueling hours of dying, swearing, and respawning, the game freezes right at the end of chapter three for me. I can hear my teammates, and they can’t hear me. They finish the mission. My progress doesn’t save, and I receive no achievements. A nearby salt shaker falls, spilling salt everywhere.

“Great! This new dashboard is a real piece of shit. It lags, games and apps crash, and I have constant issues with it. Somehow the Xbox One has managed to get worse since launch!”

My friends sit in silence while I lament how console gaming has morphed into a bunch of hoops you have to jump through.

“Remember back when gaming consisted of putting in the game, turning on the console, and pressing start? Those were the days. Now I have to update my consoles software, sign in to Xbox Live, install the game, update the game that just installed, open a party in a separate app, pray to a god I don’t believe in that others can connect, and then I can play.”

Since then, the new Xbox One dashboard has gotten far better, but it doesn’t change the fact that so much bullshit stands in the way.

It is just me and my first-ever Xbox Live friend Kevin left now. Everyone else has gone to bed. It’s getting pretty late. We decide to play some multiplayer, only to discover that my headset is cutting in and out. At this point, I’m still not sure if it was the software or hardware. I haven’t bothered to attempt chatting since. I just yell into my Kinect, which works surprisingly well now, as if Microsoft has refined its voice functionality through updates. 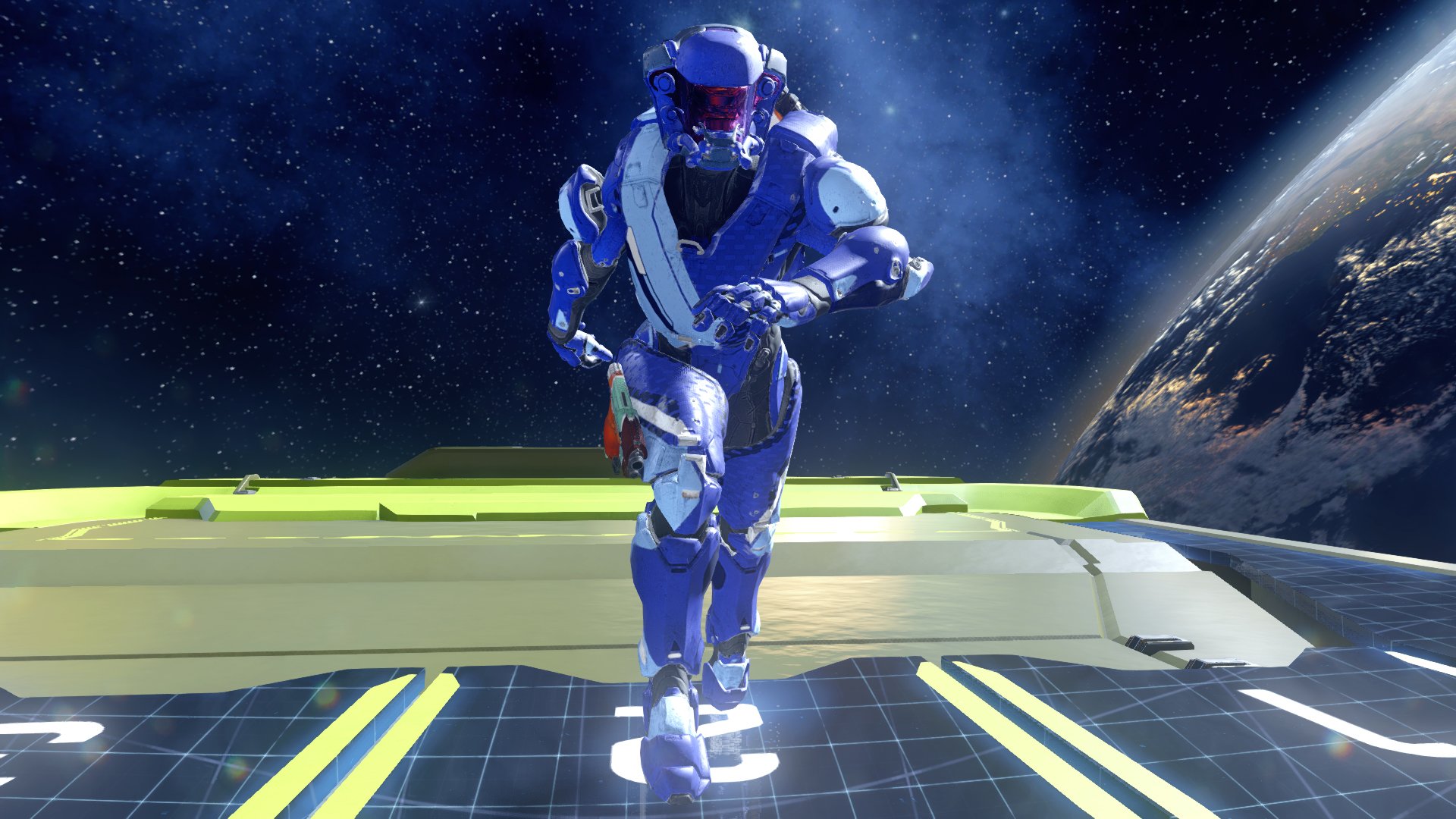 Kevin heads to bed, so I decide to go back to completing matches to be assigned a rank in each of the online game types, starting with one of my go-to playlists, SWAT. In SWAT, there are no shields, a single headshot will bring opponents down, and you either start with a magnum or a battle rifle (one of the only times I don’t mind BR starts). After ten qualifying matches, I am awarded the rank of onyx, or what was previously known as semi-pro in the beta. Onyx is the highest rank you can qualify for apart from being one of the top 200 players in each playlist; those players are ranked as champion.

After achieving onyx in SWAT, I decided it would be a good idea to go ahead and get ranked in all the other playlists. Next on the list was free-for-all, because I’m a wolf pack of one. Free-for-all is probably my most-played game type across all of the Halo series because I don’t have a lot of people I play with and tend to avoid making new Xbox Live friends for no particular reason. Even though I’m confident in my skills, I lost a few of my ten qualifying matches but still managed to achieve onyx.

Then I set my sights to the all-new Breakout game type. I wasn’t a fan of it in the beta, but perhaps I’d like it now. I got destroyed nearly every single match for my first few matches and managed to get carried for a few wins by my teammates. After winning my last few qualifying matches, I was feeling confident I’d be ranked at least in silver or higher. Nope. Bronze. Me in bronze, the lowest rank in the game!? The person who has played every game in the series at launch given the lowest possible rank!?!? Bullshit. I went to bed after angrily shutting off my Xbox One while cursing 343 and Breakout.

The next day I finished getting ranked in the other playlists by achieving gold in Slayer and platinum in Team Arena. I couldn’t stand that I was ranked bronze in Breakout, so I decided to torture myself some more and give it a go again. Turns out, I was hilariously under ranked. 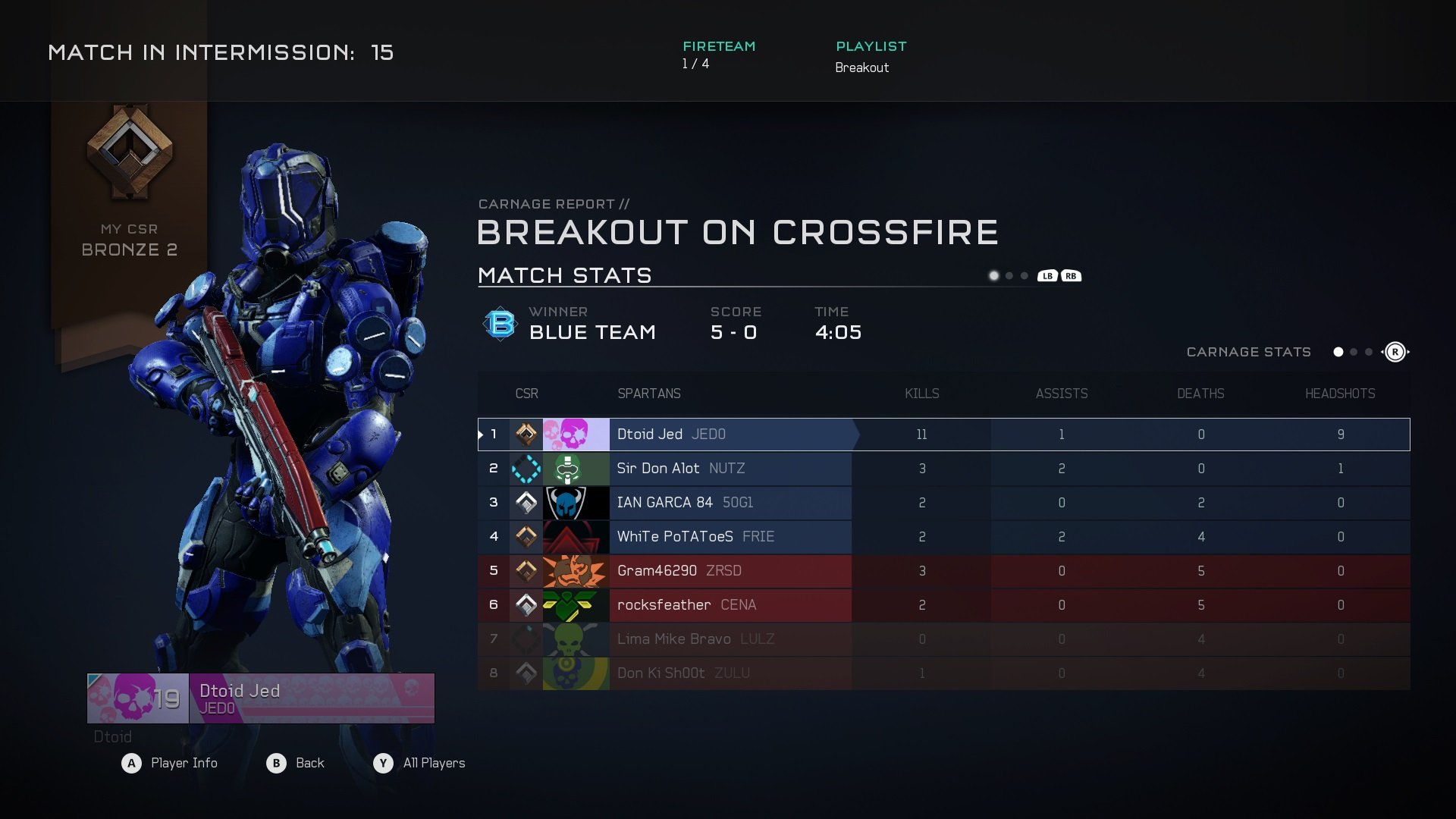 “What a relief,” I thought to myself, “but wow are these kids awful.”

My opponents and teammates were so bad, it was like competing with someone that had never played an FPS before, or like a young relative. They walked into walls, stared at the sky and ground, and were just all-around bad. I’m not saying this from a place of feeling superior, but the people I was playing with were clearly ranked correctly.

Suddenly Breakout became fun. I’d hear people on my team cheering me on as they watched from the grave as I mowed down the remaining three players on the other team. This happened again, and again, and again. Eventually, I hit rank six of bronze, and the competition picked up a smidgen but would wildly vary between matches; some were a piece of cake, others were more evenly matched. Then it finally happened: I hit silver with a nice five-round sweep.

I know it wasn’t much of an achievement since I was grossly under matched, but I was thankful for it. Thankful for the opportunity to learn how to play Breakout without having much in the way of competition, and learning from my opponent’s mistakes, as well as seeing the error of my ways in the qualifying matches. Plus, it doesn’t hurt that I could easily get commendations for kills. 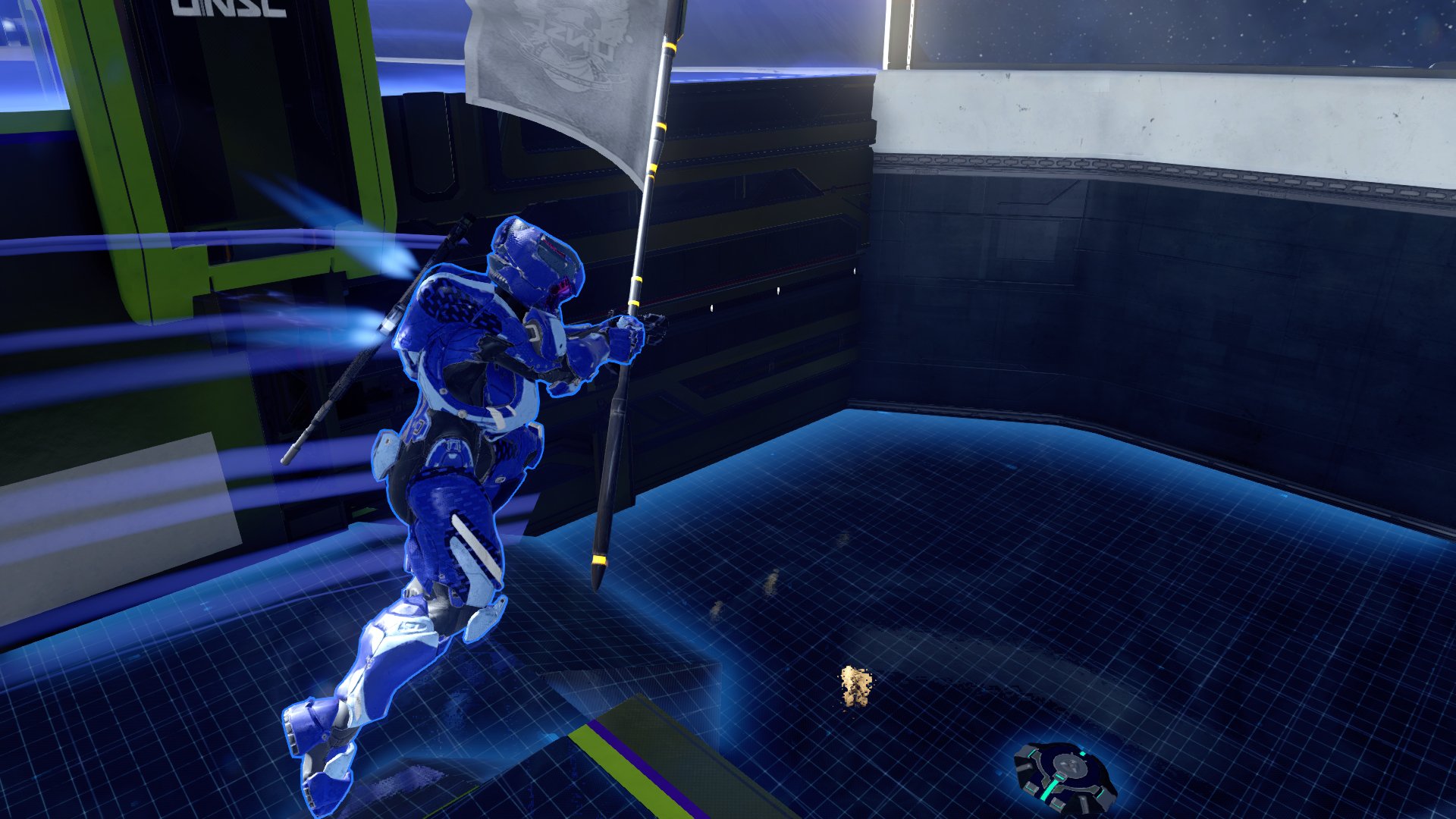 Breakout has quickly become one of my favorite game types, and not just because I win a lot, but because it is fun. I know a lot of Halo players aren’t huge fans of it yet — including the team that rage quit during the finals of a tournament recently by suiciding and afterward tweeted at the official Halo account, “I’d rather commit suicide on mainstage than play your shitty game type.” But really, people should give it a chance. It might just grow on you.

I’m sure I’ll be playing Halo 5‘s multiplayer for some time, as it feels like one of the most balanced games in the series thus far. If you’d like the chance to hear me angrily swear from time to time while playing Halo 5, then be sure to join Destructoid’s Spartan Company and prepare to be carried.