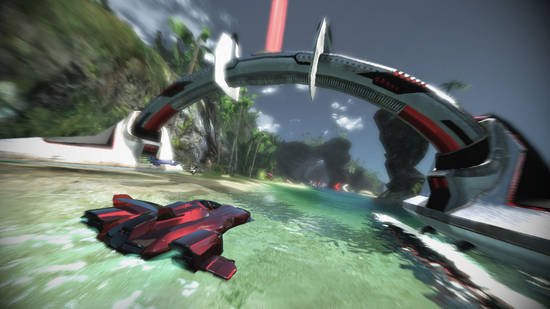 Following MTV Multiplayer’s exclusive, KOEI has officially announced today that it will be bringing Fatal Inertia EX to the PlayStation 3 next month. A revamp of the retail title Fatal Inertia that was released on the Xbox 360 last year, the title will be available exclusively on the PlayStation Network and will cost $29.99.

New to the PS3 title will be a new environment, the “Fatal Inertia Proving Grounds,” which acts as the game’s training environment and will house eight new tracks. Additionally, KOEI have tweaked the flight model for improved handling and even faster speeds than seen on the Xbox 360. The DualShock 3 along with SIXAXIS support has also been added as an optional control method.

The Xbox 360 title received average to abysmal reviews, garnering a truly fatal “1.9” user rating on Metacritic out of 10 reviews. Fatal Inertia EX‘s lead designer, Mike Bond, thinks they’ve made enough substantial improvements to the game to make it worth your while.

“Gamers will be amazed by all the improvements we’ve made,” he says, “Fatal Inertia EX is a faster, more visually-captivating experience packed with new content not found in the original.”

Well I certainly hope so. I’ve never played the game myself, but a “1.9” user rating?

Fatal Inertia®EX Coming To PLAYSTATION®3 In May 2008

Burlingame, CA – April 30, 2008 – KOEI, recognized worldwide as the premier brand of strategy and action games, today announced that Fatal Inertia®EX will be available at the end of May 2008 exclusively on PLAYSTATION® Network, and only for PLAYSTATION®3 computer entertainment system.

“We’re really excited about what we’ve accomplished with Fatal Inertia EX,” said Mike Bond, lead game designer for Fatal Inertia EX. “Gamers will be amazed by all of the improvements we’ve made. Fatal Inertia EX is a faster, more visually-captivating experience packed with new content not found in the original.”

Fatal Inertia EX features a never-before-seen environment exclusive to the PLAYSTATION 3 system. Situated amidst scorching desert dunes, the Fatal Inertia Proving Grounds is a mecca for aspiring flight jocks driven to prepare themselves for the mental and physical punishment of low-altitude combat maneuvering. Along with offering a restructured training curriculum, the Proving Grounds are also home to the game’s eight new tracks.

A re-tuned flight model improves handling and achieves higher speeds than previously seen. Flight controls take advantage of the DUALSHOCK®3 wireless controller and give the optional use of SIXAXIS™ motion sensing technology. The game’s newly-added “Master” level Quick Races will push the fastest men and women to their limit.

ABOUT FATAL INERTIA®EX FOR PLAYSTATION®3
Set in the middle of the 22nd century Fatal Inertia EX is an evolutionary sporting event that draws from the combined disciplines of rally racing, demolition derby, and tactical air warfare. In this brave new world of combat racing, players pilot their gravity-defying machines through the untamed wilderness, while unconventional weapons move and react to realistic principles of physics and magnetism rather than follow pre-scripted motions.

Fatal Inertia EX delivers a glimpse into the future of racing in stunning 720p HDTV and in-game Dolby® Digital audio. Multiplayer features include split-screen two-player races, online and LAN races for up to eight players, plus leaderboards. This game is rated “E10+” (Everyone 10 and older – Fantasy Violence) by the ESRB. Fatal Inertia EX is developed by KOEI CANADA. For more information visit www.fatalinertia.com.