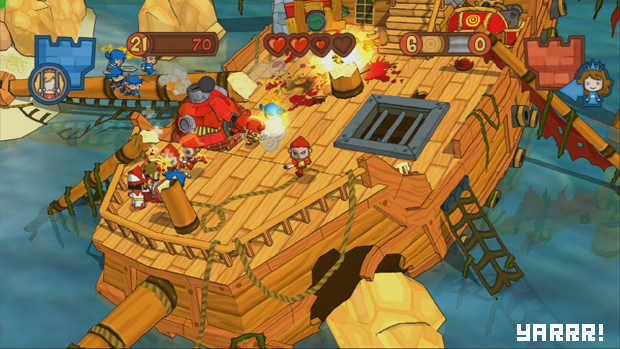 More goodness out of Sony Gamer’s Day 2009 in the form of screenshots showing off a new stage for Fat Princess. The level is named “Sugar Cove” and features two shipwrecked vessels around a deserted island. One thing I found particularly charming about this level are the rope bridges which retract when nobody from your team is standing near them but pop right back out should someone authorized to cross need to do so.

Something else of note in these screenshots which may help out those of you playing the Fat Princess Beta and struggle playing with a group of AI characters just running off and doing their own thing all the time. According to a hint at the bottom of one of the screens, you can press up on the directional pad when near an NPC and he’ll join up with you. Apparently you can get up to three characters in your posse. I really wish I had known that before.

Hit the gallery to see the new level in glorious color.