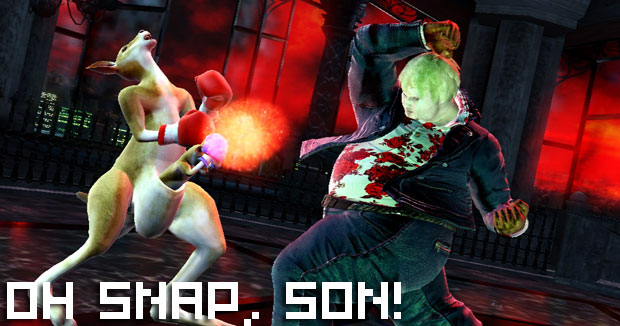 Namco Bandai sent some new screens for the upcoming console versions of Tekken 6, and as promised, that includes images of a fat dude punching a kangaroo in the face.

This confirms a few things, most of which we already knew. One, Bob — the “fat dude” — will be in the game. The kangaroo, Roger Jr., is also making appearance. They’ll be joining Miguel, Zafina, Armor King, and Raven, also pictured in these new images. The Iron Fist Tournament is going to be crowded when the game ships this fall for Xbox 360 and PlayStation 3 — Namco Bandai says it has the “largest line-up the series has ever seen.”

There’s always a few of you who say that Tekken is the true king of fighting games. Then there’s the crew who calls it out for being total s**t. You’re all invited to argue in the comments.